A radical union’s ascendancy has the potential to change everything

A radical union’s ascendancy has the potential to change everything 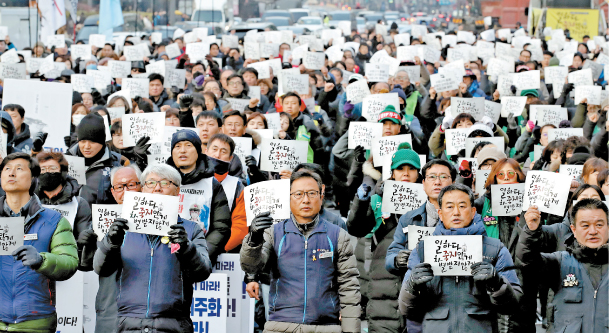 Members of the Korean Confederation of Trade Unions hold a rally in Seoul earlier this year commemorating the death of an irregular worker who died a year ago. [YONHAP]

Korean Confederation of Trade Unions (KCTU) has become the king of unions. According to data published by the Ministry of Employment and Labor on Wednesday, the KCTU’s membership increased 36.1 percent, or 257,000 people, totaling 968,000 in a year.

It’s the first time for the KCTU to take the top spot in 23 years since its formation in November 1995.

Before the rise of the KCTU, the Federation of Korean Trade Unions (FKTU) stood as the most dominant union in Korea.

Established in August of 1961, the pragmatic and rather reserved FKTU is known for seeking a middle ground with employers.

The more militant KCTU is famous for taking up arms against the government and chaebol and fixating upon progressive ideologies.

Though the FKTU had managed to maintain its top position through 2016, keeping the gap with the rival by more than 200,000 members, the table was turned in just one and a half years after President Moon took office in 2017.

The labor unionization rate rose to 11.8 percent from 10.7 percent in 2017. Both numbers mark the highest percentage since 1989, when related statistics were first compiled. 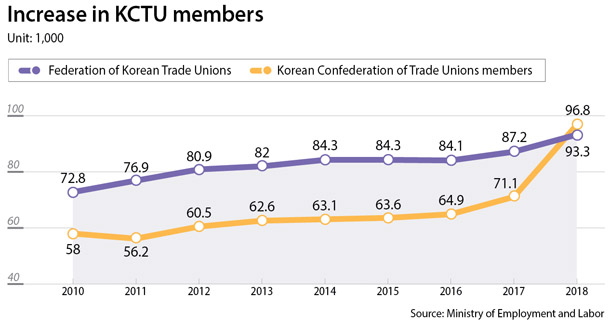 “The government must actively engage in cooperation between labor and government in order to lay a new foundation for tackling polarization and inequality together with the KCTU, which has undoubtedly become the number one union in Korea,” said KCTU in its statement.

By making such remark, the KCTU virtually sidelined the Economic, Social and Labor Council (ESLC), which typically serves as a body for legal and social dialogue.

To read between the lines, the remark indicates the KCTU’s intention that it would not acknowledge organizations that represent the Korean economy, such as Korea Employers Federation.

After becoming the biggest union in Korea, the KCTU is already flexing its muscles.

“Relatively few KCTU members were included in various government committees just because we were the runner-up, but now, readjustments must be made according to the newly published government data,” added the KCTU.

Currently the FKTU and the KCTU have their members in some 70 government organizations.

Until now, the FKTU has commanded majority. However, if KCTU’s demands are accepted, the union will undoubtedly have greater clout in the government.

It was the public sector that played a key role in the KCTU outnumbering the FKTU.

When the government accredited the Korean Government Employees’ Union in March 2018, and as it switched non-regular workers in the public sector to regular status, a new influx of union members flowed in from the public sector.

Most of the new members joined the KCTU. This is why some say that “the government has the credit for pushing the KCTU to the top spot.”

“The government’s policy such as switching non-regular workers in the public sector to regular status pushed aside the FKTU, which previously stood as a primary partner in discussing policy with the government,” said an official from an economy organization who requested anonymity.

The government is in a pickle.

The KCTU has made requests to form an exclusive dialogue channel between labor and government and allow more participation of its members in government committees.

Not only do those requests dismiss the ESLC, they also reject social partners such as the Korea Enterprises Federation.

The KCTU is essentially demanding a system where it can directly speak with the government and bypass any third parties.

“Shockwaves are inevitable as the KCTU now stands as the biggest union,” said a high-ranking government official, adding that the relationship between labor, management and the government will face some turbulence.

The tripartite Committee’s legitimacy hangs in balance. The committee served as the bedrock for social dialogue with the support of the FKTU. However, now that the FKTU has relinquished its first place to the KCTU, the committee is missing the biggest union in its dialogue. Power transition in unions will likely raise KCTU’s standing in many ways.

First, the KCTU is expected to exert greater control in government policies. Labor bodies can participate in some 70 government committees by sending members to represent workers.

After the shift in the union ranking, committees are also in a predicament.

Until now, the FKTU has commanded the majority by filling the seats with its own people or by making recommendations.

Considering that labor can make recommendations for members representing public interest in government committees, the KCTU’s influence is expected to only grow as its recommendations will be considered first. In other words, there is no dispute about the KCTU’s rise in power.

Change is also expected in executives running public institutions. Institutions such as the Korea Workers’ Compensation and the Welfare Service and Human Resources Development Service of Korea are bound by laws and articles of incorporations to choose non-executive directors recommended by labor.

Until now, the FKTU has made recommendations.

“Starting from public institutions where terms of non-executive directors end, the KCTU can ask for recommendation rights,” said an official in labor.

But the KCTU is the one with the greatest challenge.

The union is now burdened with the task of escaping from its path towards struggle and protest and taking social responsibility as the number one union of the country.

“When the KCTU was the runner-up, the FKTU served as a breakwater for labor as it was in charge of negotiations through social dialogue, but now, the KCTU has no choice but to take that role,” said Park Ji-soon, a professor at Korea University School of Law.

“Competition for expansion between two unions following the shift in the ranking will likely provoke confusion in industries,” said Kwon Soon-won, a business professor at Sookmyung Women’s University.