Hotel Lotte and Hana Financial Investment purchased a hotel in downtown Seattle for Lotte to expand its reach in the U.S. market.

The Lotte Group affiliate announced in a statement Sunday that the company and Hana Financial Investment signed an agreement last Tuesday with U.S. private equity firm Stockbridge to purchase Hotel at the Mark for $175 million. 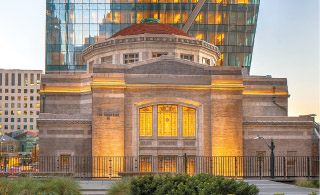 The Hotel at the Mark in downtown Seattle. After being acquired by Hotel Lotte and Hana Financial Investment, it will start operations in June as Lotte Hotel Seattle. [HOTEL LOTTE]

The hotel will be renamed Lotte Hotel Seattle and start operations in June next year. It will be run through a contract management system, an asset-light strategy that Hotel Lotte has been using in its overseas expansion.

Hana Financial Investment and Hotel Lotte signed a memorandum of understanding in September to jointly work on overseas hotel expansion.

The 44-story luxury hotel is located about 20 kilometers (12 miles) from the Seattle-Tacoma International Airport and has 189 rooms, 31 of them being suites, and 16 floors. It also has a Beaux-Arts style three-story building attached to the hotel building that can be used for meetings and banquets.

Hotel Lotte said the new hotel will be able to enjoy substantial marketing effect because it is closely situated to the headquarters of large global corporations like Microsoft, Amazon and Starbucks. The company also hopes to attract event hosting opportunities from global companies as the hotel is also close to branch offices of firms like Apple, Walt Disney and Hewlett Packard.

“By expanding to Seattle, the biggest city in the northwest United States, after acquiring Lotte New York Palace in 2015, we have risen to become a hotel brand that can stand shoulder to shoulder with global-level hotel corporations,” said Hotel Lotte CEO Kim Hyun-sik in a statement.

“We will strengthen our position as a hotel corporation with more aggressive expansions.”

By opening Lotte Hotel Seattle, Hotel Lotte will have a total of 32 hotels and resorts globally, with 20 in Korea and 12 overseas. The company currently operates hotels in New York City and Guam.

The acquisition is expected to help Hotel Lotte’s planned initial public offering on the Korean stock market. The Lotte Group affiliate has been touted as the key for the conglomerate to improve managerial transparency and be fully committed to doing business in Korea and be less reliant on business in Japan.

Hotel Lotte is a sub-holding company of Lotte Group that owns significant equity stakes in Lotte Corporation and Lotte Shopping. Lotte’s Japanese companies and the Lotte Holdings Japanese parent company have almost total control over Hotel Lotte, and when Hotel Lotte becomes listed, Lotte Group will be able to reduce the influence of Japanese interests.