Samsung Electronics is in plan to release a second smartphone that folds, sources said Sunday - at a much cheaper price.

According to mobile carrier sources, Samsung Electronics is coordinating a launch with Korea’s three mobile carriers for the yet-to-be-named “clam shell” smartphone by February. 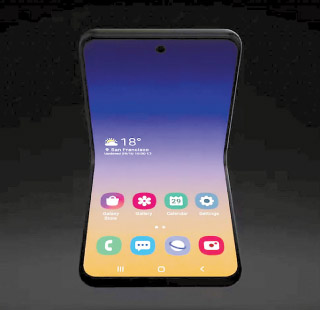 The Galaxy Fold smartphone launched earlier this year folds horizontally like a book. The clam shell-type phone folds vertically. The phone will likely be offered for 4G LTE networks and is expected to be priced at around 1 million won ($860).

The Galaxy Fold works on the latest 5G networks and is priced at 2.4 million won.

The clam shell smartphone could have a name distinct from the Galaxy Fold series. Samsung Electronics is already working on a second model to be released in the second half of next year.

Many believe the cheaper folding smartphone will be officially unveiled at a new product launch event in the United States in February along with the next generation model for the Galaxy S series.

“Samsung Electronics is planning to release the next generation foldable smartphone in February,” a carrier source said. “But the new Galaxy S could go on sale a bit earlier.”

Samsung Electronics declined to confirm any details about the phone.

The second foldable smartphone for Samsung Electronics was teased at the Samsung Developer Conference 2019 in Silicon Valley in late October. A Bloomberg report said the new phone’s inner display measures 6.7 inches before it folds, and the entire device is designed to be thinner after it’s folded than the Galaxy Fold.

The Galaxy Fold uses polyimide from Sumitomo for its display cover, but sources say the new foldable smartphone could use ultra-thin glass made by Germany’s Schott AG or local manufacturer Dowoo Insys.

With a new material, the new phone may not have the fold mark seen on the Galaxy Fold display. Images of the smartphone on Chinese social media show that the clam shell smartphone is almost perfectly square when folded and doesn’t show a fold mark on its screen.

Analysts believe that Samsung Electronics is hurrying to launch a clam shell-type smartphone to stay ahead of competitors.

Motorola’s foldable phone Razr is starting official sales in the United States next month, and Huawei is expected to unveil its second foldable smartphone, the Mate Xs, at the Mobile World Congress 2020 in February.

Samsung Electronics has formally announced that it plans to sell 6 million units of foldable models next year.