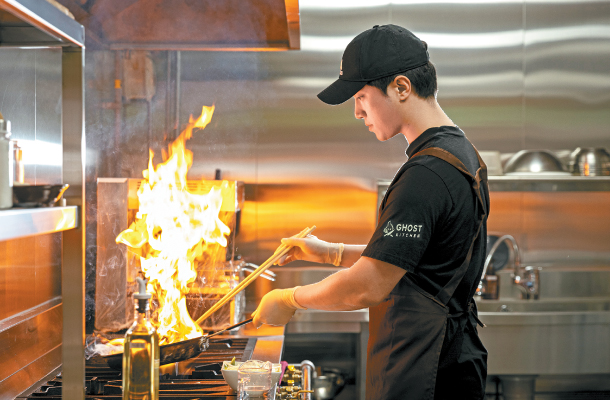 A chef cooks a dish at a shared kitchen provided by start-up Ghost Kitchen. [BUTTON SOUP]

Restaurants are in crisis.

According to a Korea Foodservice Industry Association survey of 400 restaurants, 31.3 percent of restaurants shut within a year, and other sources indicate that four in five close within five years.

The situation is going from bad to worse for the 1.99 million people working at restaurants.

Some start-ups are finding the proverbial silver lining in the cloud. 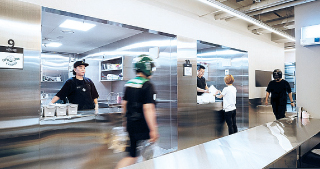 By utilizing information technology, they are providing support for small businesses struggling to survive. As the founders of the start-ups have run restaurant businesses themselves, the solutions are down to earth and practical.

Choi introduced shared kitchen services to those struggling to start businesses due to overwhelming initial costs, which can total 100 million won ($86,000) when rent and interior design costs are factored in.

Ghost Kitchen provides a 13- to 23-square-meter (140- to 247-square-foot) kitchen spaces for a monthly rent of between 1.5 million and 1.7 million won and a deposit between 10 million to 12 million won. The spaces are in a commercial area in Gangnam District, southern Seoul.

“In the film “Parasite,” the protagonist family falls into poverty after their Taiwanese Castella cake business fails. But this is not fiction,” Choi said. “I came up with a service that would solve the high cost structure when opening up a restaurant that would help raise the survival rate.”

In the Hwanghak-dong flea market, often dubbed as the “Mecca of home appliances,” a start-up deals in the goods of the trade. Hwanghak-dong Online connects stores selling refrigerators, cutlery, tables and the like with restaurant owners. When a consumer enters specific types and the quantities of cutlery, estimate sheets from different stores come up on the screen, allowing customers to compare prices.

“I came up with the idea when one of my friends sold off the cutlery for almost nothing after closing his restaurant,” said Lee Kyung-jin, CEO of the company.

One start-up focuses on lowering the price of ingredients by cutting retail costs. Founded by CEO Lim Sa-sung, Marketboro provides a business to business (B2B) ingredient-ordering platform called Market Bom, which allows restaurant owners to place orders for ingredients by mobile app instead of conventional ways of ordering by making phone calls and sending text messages.

As Market Bom places orders automatically by analyzing the data of ingredients in stock, the platform recorded sales worth 220 billion won this year.

With the data collected by Market Bom, the company also runs an open market called Foodspring. Foodspring is a platform that offers ingredients at 12 to 25 percent discounts to big discount chains and retailers.

“After witnessing restaurants placing orders the same way I did 15 to 20 years ago when I ran Ramen and traditional Korean food restaurants, making it ‘online’ became my mission,” said Lim.

Jeon Sang-yeol, founder and CEO of NowWaiting, which runs Nowbusking, created the service so that “small businesses can easily benefit from information technology.”

“[The app] sends a notification to customers when they are third or fourth in line, so there are fewer ‘no-shows,” said Kim Moo-kyung whose restaurant sells jokbal.

NowWaiting took a step further from just sending notifications. The app provides owners with comprehensive customer data, including waiting time according to day and time, and how many times each customer has visited the restaurant. Currently, 1,800 restaurants and shopping malls are subscribing to the service.

Blue Night, another Korean start-up, was founded by a pub owner. Kim Yong-jin, CEO of the company who started a pub after quitting his job as a researcher at Samsung Electronics, realized that keeping track of the clock in and out times of employees and their payrolls was harder than he imagined. That is why the CEO created an application called Albam, which automatically records employee attendance, shifts and the wages. Used by more than 100,000 businesses, the application calculates actual payroll by taking legally-mandated paid holiday hours, social insurance and tax deduction into account. The service is free for private businesses.

“Collaboration of the food service industry and start-ups with data base AI technology can enhance the chance of survival for those starting new businesses as not only tastes but improving customer service can lead to ‘good business,’” said Hong Tae-ho, professor of business administration at Pusan National University.