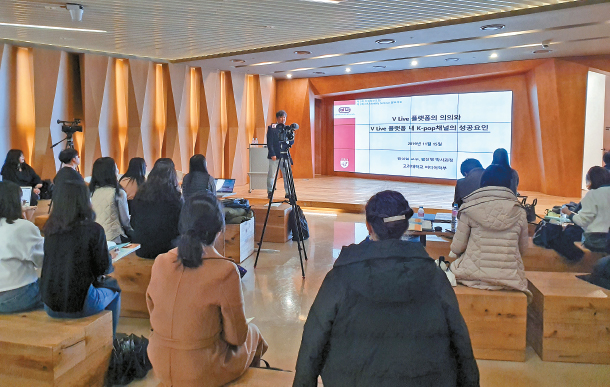 Audience members listen to a presentation at the V Live seminar held at Korea University. [NAVER]

V Live, Naver’s live global community platform, is synonymous with millennials for watching Korean content according to reports presented at the V Live seminar held on Nov. 15 at Korea University on the effectiveness of the platform and how it spreads Korean Wave content globally.

V Live is a live video streaming service that allows celebrities based in the country to broadcast live videos on the internet and live chat with fans.

After analyzing the Southeast Asian video market, the diverse content of V Live was shown to increase the amount of active users including subscribers and viewers.

The popularity of the streaming service is an important factor in making Korean content go viral and the growth of the celebrities who create such videos.

The support offered by the V Live platform, based on technology and data, has also been correlated to the celebrities growing in popularity around the world.

While V Live distributes Korean content globally, its spread of local content to neighboring countries in particular may transform Naver into a global pipeline.

V Live has proven its competitiveness as a global live streaming platform in the Southeast Asian video market even when compared to Youtube and Facebook.

It has been reported that teenagers in Indonesia, Vietnam and the Philippines mostly view the Korean content via the internet and social media, and in all 3 countries, V Live was one of the top platforms utilized along with Youtube and Facebook.

The success and growth of V Live can be seen as a driving force behind the transformation of the Korean cultural content phenomenon into a more industrialized form to strengthen global competitiveness and create a new platform-based sensation.