Chung’s university has to decide

Chung’s university has to decide 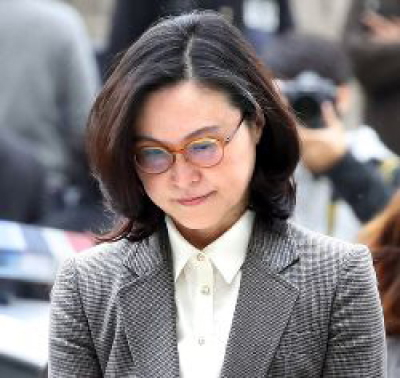 Dongyang University will convene a disciplinary committee meeting to determine the fate of Chung Kyung-sim, wife of former Justice Minister Cho Kuk - with the possibility of her dismissal as an English professor.

Citing an unnamed high-level executive from the school in Yeongju, North Gyeongsang, the JoongAng Ilbo exclusively reported that the school received a summary report from prosecutors around Christmas last week that detailed the results of their investigation into Chung, who has been indicted for fraud, embezzlement and faking an academic award for her daughter.

Upon receiving the report, the source, who spoke on the condition of anonymity Sunday, said the university’s board of directors decided to start preparations to open a disciplinary committee meeting “shortly.”

The meeting will decide Chung’s level of punishment, the source said. If the university decides to fire Chung, she will lose her office on the school’s campus and be forced to return the computer she took away last September before prosecutors raided her office.

Prosecutors believe Chung was trying to hide and destroy evidence, though she adamantly denied that accusation.

Chung, who is currently detained and awaiting trial on at least 15 charges, applied for a year-long unpaid sick leave from the university last September when prosecutors began to dig into her and her family’s private equity fund investments and the allegation she forged an award for her daughter to help her get into medical school.

Dongyang University accepted the leave and told local media numerous times it could not penalize Chung because the probe was ongoing.

The Seoul Central District Prosecutors’ Office’s probe into Chung effectively wrapped up on Nov. 11 when it indicted her on 14 charges, on top of a first charge filed on Sept. 6.

The first time Chung was indicted by prosecutors was just moments after a parliamentary confirmation hearing for her husband, nominated to be justice minister, wrapped up.

Chung was accused of allegedly creating a Dongyang University presidential award for her daughter - without the knowledge of the president of the university - and secretly placing his seal on the award.

Prosecutors normally indict a suspect after they’ve been questioned, but Chung was indicted that night without any questioning because the statute of limitations for her charge was about to expire the next day, Sept. 7.

In the following weeks, prosecutors managed to detain Chung and question her multiple times, which led to their determination on Nov. 11 to press 14 more charges against her, including obstruction of business, fraud, embezzlement and instigation of tampering, hiding and destroying evidence.

Prosecutors are investigating Cho on similar charges, and are expected to indict him as early as this week.