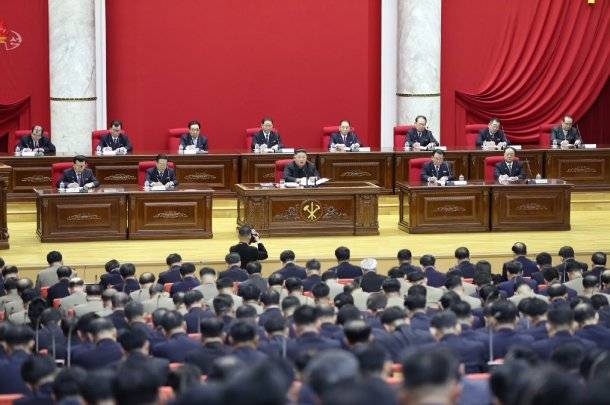 With North Korean leader Kim Jong-un presiding, the 5th plenary meeting of the 7th Central Committee of the Workers’ Party was opened to “overcome the manifold and harsh trials and difficulties and further accelerate the development of the revolution with transparent anti-imperialist independent stand and firm will,” read an English-language report from the official Korean Central News Agency (KCNA).

The meeting is the country’s highest forum for the discussion of policy issues, and is expected to be the occasion through which Kim announces a major policy shift in denuclearization negotiations with the United States.

KCNA added that Kim “started to make a report” - to which the Korean-language KCNA report added the epithet “historic” - regarding state affairs, but no details were provided as to what his speech contained.

“The immediate orientation of the struggle of the WPK and the state and important policy issues for new victory in our revolution under the present situation were brought up as agendas of the plenary meeting,” the report said.

A major announcement could emerge on the second day of the conference, to be promulgated through state media. This is the first time in eight months that North Korea has held a central committee plenary meeting, after one on April 10 in which major personnel changes to the country’s foreign and economic policy leadership were announced.

In an even earlier meeting in April 2018, the North formalized the beginning of an engagement policy with the United States and South Korea by proclaiming it had adopted a moratorium on nuclear and intercontinental ballistic missile (ICBM) tests, and said that it would be dismantling a nuclear test site at Punggye-ri.

While such pledges helped enable a historic first summit with the United States in Singapore that June, the two sides failed to resolve their differences over Pyongyang’s denuclearization at a second summit in Hanoi, Vietnam, this February.

In the aftermath of the collapse of that summit, Kim appeared to adopt a tougher stance towards Washington in this April’s plenary meeting, saying he would “deal a telling blow to the hostile forces who go with bloodshot eyes miscalculating that sanctions can bring the DPRK to its knees.”

Yet still hoping for a settlement that could shake off international sanctions choking its economy, Kim stuck to a diplomatic approach that resulted in an impromptu third meeting with U.S. President Donald Trump at Panmunjom in June, belatedly followed by a round of working-level talks in Stockholm in October.

With the United States maintaining sanctions relief cannot precede denuclearization steps, North Korea has been scaling up its public threats, suggesting it could react with a major provocation by a self-imposed deadline for talks by the year’s end.

Both the United States and South Korea have been keeping close watch on whether Pyongyang conducts a long-range missile test or any other similar provocation, though Dec. 25 passed by without the North presenting the “Christmas gift” it promised Trump if its demands weren’t meet.

With many experts noting that a long-range missile launch by the North appears unlikely due to its irreversible implications, some analysts say Kim may opt to raise pressure at the plenary meeting with just a verbal announcement that he will no longer maintain a moratorium on nuclear and ICBM tests, without actually following suit.

The meeting could also be used for a major personnel change similar to that which happened in April, when Kim promoted one of his most trusted lieutenants in the negotiations with Washington, First Vice Foreign Minister Choe Son-hui.