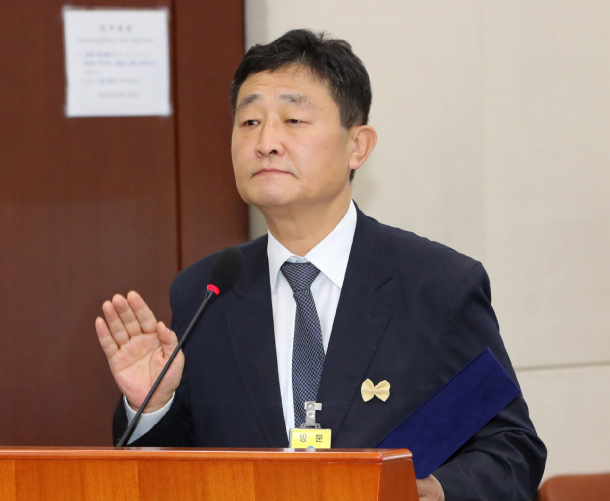 A local court last Friday rejected a pretrial detention warrant for Heo In-hoe, a former pro-democracy student activist and a member of the so-called 386 generation, who faces criminal charges of failing to pay employees at a small solar power company he ran.

The rejection was a blow for prosecutors and especially for critics of President Moon Jae-in and the ruling Democratic Party (DP), who had hoped the 55-year-old would be detained amid swirling suspicions he received preferential treatment from the government for his solar power projects - allegations that are currently being investigated by police.

Had the court decided to detain Heo, the two probes were expected to pick up momentum.

Heo is accused of violating the country’s Labor Standards Act and the Employee Retirement Benefit Security Act by allegedly failing to pay at least 36 employees’ wages and retirement payments at a company he ran from 2015 to last July, which built solar power generators.

Prosecutors had asked the Seoul Bukbu District Court to issue a pretrial detention warrant for Heo, but the court refused to do so, saying that the suspect admitted to his crimes and pledged to do his best to reimburse his former employees.

The court said Heo didn’t seem likely to flee or destroy evidence, and mentioned that 26 out of the 36 victims have submitted written forms to the court explaining why they don’t want Heo to be punished.

After the court’s verdict, Heo complained to reporters that the media and conservative lawmakers were trying to use his case to attack the Moon administration’s nuclear phase-out policy.

Heo denounced prosecutors for “overly misunderstanding” the case, saying he didn’t delay the payments on purpose and that he managed to pay off 300 million won of the overdue wages, and is currently working on the remaining 200 million won.

Asked whether he forced employees last Thursday to tell the court they don’t want him to be punished, Heo denied any coercion.

Heo was president of Korea University’s student council in 1985, when Korea was ruled by the authoritarian leader Chun Doo Hwan, and is known to have played a major role in the student protests fighting for democracy.

The 386 generation refers to people who were in their 30s in the 1990s (accounting for the numeral 3), were college students and politically active during the pro-democracy movement in the 1980s (the 8) and who were born in the 1960s (the 6).

Many key members of that group have risen to top government and Blue House positions in the Moon administration, including former Justice Minister Cho Kuk.

Heo ran for a seat in the National Assembly in 2000 and 2004 as a candidate backed by the DP’s predecessors, but lost in both elections.