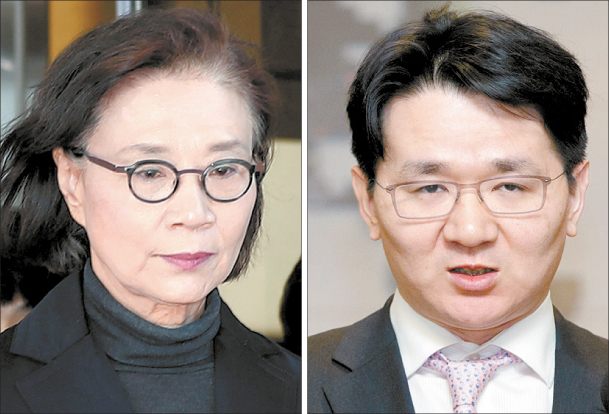 The chairman of Hanjin Group and his mother issued a joint apology for a fight on Christmas Day that led to broken glasses and injuries.

Cho Won-tae and his mother Lee Myung-hee had an argument on Christmas over the management of the conglomerate following the death of patriarch Cho Yang-ho.

“We deeply apologize for causing concerns to many people over a shameful event that happened on Christmas at the house of Lee Myung-hee, an adviser to JungSeok Enterprise,” read the statement released Monday. “Chairman Cho Won-tae immediately fully apologized to his mother, and Lee sincerely accepted the apology. We - mother and son - will follow the dying injunctions of former Chairman Cho Yang-ho to work through family harmony.”

Cho reportedly left Lee’s house angry, while Lee suffered minor injuries in a scuffle. She sent pictures of the injuries to some executives and asked for their protection.

Former Korean Air Vice President Cho Hyun-ah, 45, the eldest of the three siblings, is known to have been at the scene.

The argument was connected with Lee’s backing of Cho Hyun-ah, who recently accused her brother of squeezing her out of a more important role in the group.

JungSeok Enterprise is a building management company in the group.

The Cho family is battling over management of Hanjin Group ahead of Hanjin KAL’s annual general meeting of shareholders set to take place in March.

Hyun-ah, who gained international notoriety in 2014 for forcing a plane back to a gate at New York City’s John F. Kennedy International Airport when she wasn’t served macadamia nuts on a plate, last week accused her younger brother of arbitrarily managing the group.

She argued Won-tae has been “insincere” in implementing joint management of the group, as implored by their late father in his dying words.

She currently holds no position in management.

Amid the family feud, the Korea Corporate Governance Improvement (KCGI) fund has been raising its stake. It has increased its shares in Hanjin KAL to 17.29 percent.

That is smaller than the combined 24.79 percent owned by the Cho family. But if one of the family members supports the KCGI in any vote, the situation could be reversed.

Hyun-ah last week revealed that she is “willing to talk to any shareholder, including the KCGI,” a spokesperson for Hyun-ah told the JoongAng Ilbo.

In fact, analysts believe Won-tae and Hyun-ah could cooperate with the KCGI - if it’s in their interest.

“The siblings will never give up on management rights, so their only choice could be to compromise with the KCGI,” said an analyst.

“That means they could accept management changes that the KCGI has been proposing.”

The KCGI has raised issues over the corporate governance of Hanjin Group.