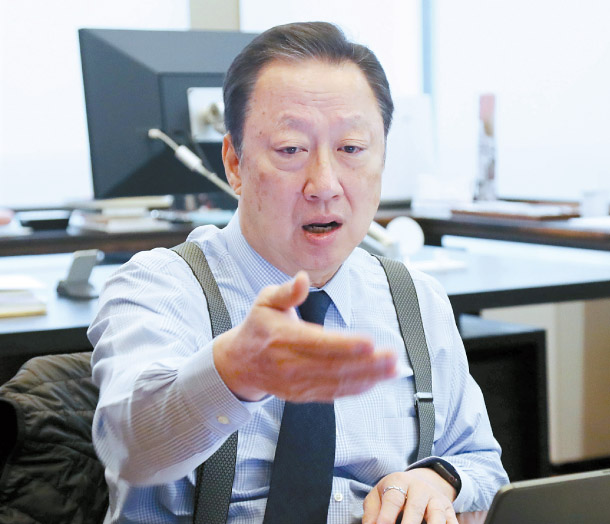 For Park Yong-maan, chairman of the Korea Chamber of Commerce and Industry (KCCI), 2019 has been a year of frustration. When the JoongAng Ilbo spoke to Park last Thursday, the 64-year-old chairman choked up, wiping away tears with a handkerchief.

“The 20th National Assembly should be the last of its kind,” said the chairman, ratcheting up his criticism against politics.

“The statistics is the proof,” added the chairman.

Though the chairman laid out his criticism by saying the “Korean economy seems like an abandoned and forgotten child” back in September, his criticism is now even sharper.

The chairman has visited the National Assembly more than 15 times this year, pleading for lawmakers to “please get rid of the regulations strangling young businessmen.”

Helped along by his effort, the bill for the online investment-linked finance business, or the P2P Act, was passed in October.

“I made a call at 10 p.m. to a chairman of a party to please set up a meeting to discuss the bill ‘for the sake of young people.’ Thinking of young people, I choked up, and words didn’t come out of my mouth,” he said.

Below are the excerpts of the interview with JoongAng Ilbo.

Q. President Moon emphasized getting rid of regulatory hurdles. But what is the reason behind being unable to do so right away?

A. Laws and systems that run our society are outdated. Rather than requiring a license before even starting a business, government should be more open and let companies start their businesses first and take care of the paperwork afterwards. However, the National Assembly isn’t cooperating. So how can those sitting in public office bring change? Who would dare stick out their necks out when the National Assembly scolds the government whenever it tries to do something?

Why did you step forward as a “middleman” to eliminate regulations?

I held a meeting around spring with friends running ventures, and I was shocked. The meeting boiled down to four issues: regulatory void, timid administration, collision with the establishment and a lack of understanding of convergence. As the young struggle because of the system created by the old, I stepped up to “untie the knot tied by the old.”

Is there any reason for raising your voice against politics?

Young businessmen are running away from business because of the regulatory void, even if they come up with new business models. Meanwhile, politicians are showing up at forums and seminars for helping and cultivating young businessmen just for photo ops, posing in the first row. However, the reality is too dire to gloss over these incidents.

What is your take on the Tada controversy?

It’s a problem that can’t be solved without an intervention from the government. This is the question I want to ask: When Uber and Grab are in business in other countries, how did Korea end up in a situation where services like those can only be available through loopholes in the law? This is not normal. People’s convenience should be put first and foremost.

The sharing economy is in crisis as evidenced by the failed initial public offering of WeWork.

Countries that tried the sharing economy learned a lesson from that. Meanwhile Korea is learning about it from the internet and newspapers without any experience. It’s serious. Making decisions based on what others tell you without any experience is like looking into the future with your eyes closed.

The trade spat between Korea and Japan intensified this year.

Chairman-level talks can’t be held between the KCCI and the Japan Chamber of Commerce and Industry (JCCI). When the honorary Chairman of Nippon Steel Akio Mimura, who is the head of the JCCI, told me to bring political issues with me, I answered that “economy is economy, and politics is politics.” Why should businessmen discuss politics? Though Japan thinks all debts are paid by the 1965 claims agreement and tells us to say no more, how can individuals’ sorrows and the history of pain be erased by a single agreement?