Despite negative reviews from critics, “Ashfall” managed to hold on to its place at the top of the local box office over the final weekend of 2019.

The local blockbuster sold over 1.2 million tickets at 1,442 screenings over the weekend and has surpassed 5.7 million total ticket sales in just 11 days since its release. The production of the film is said to have cost over 26 billion won ($22.4 million), with much of the money spent on creating the computer-generated imagery (CGI) calamities that occur due to the eruption of Mount Paektu in the film. 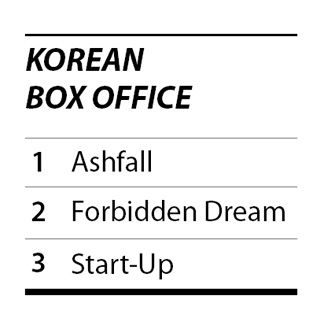 Film company Dexter Studios, who was behind the CGI in the local fantasy blockbuster series “Along With the Gods” (2017-2018) took the reins for the film as well.

Historical drama “Forbidden Dream” took second place, selling 541,000 tickets at 1,141 screens. The film fills in the blanks in the official historical records to create a heartfelt bromance between King Sejong the Great and the ingenious inventor Jang Yeong-sil. The movie tells a story to explain why the king had to cast away one of his most trusted subjects against his will.

“Frozen 2” fever is finally dying down, having sold just 191,000 tickets at 712 screens over the weekend. The film is the highest-grossing animated film in local box office history after selling 13.2 million tickets since hitting theaters last month. The movie is the third most successful film of the year in Korea, after “Extreme Job” and “Avengers: Endgame.”

Although “Cats” director Tom Hooper made a trip to Korea to promote the movie last week, the musical failed to resonate with local moviegoers.

Although audiences were curious about the star-studded cast of entertainers and singers, the film seems to have failed to surpass the criticism of its animation and lack of a strong central storyline despite the director’s attempts to bring the musical experience to the big screen. “Cats” landed in sixth place, selling a total of 110,000 tickets at 731 screens.