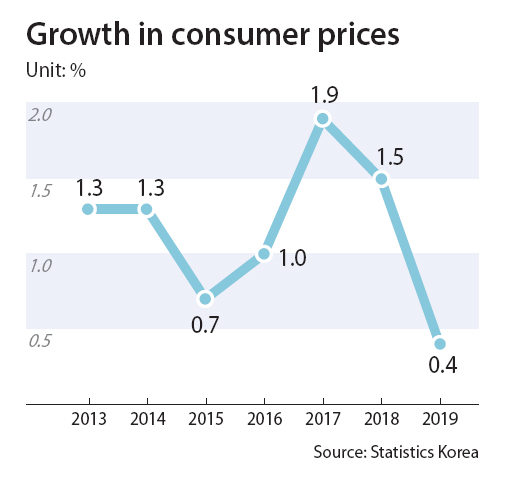 The year ended with barely any inflation, reaffirming worries that Korea was headed for the plague of deflation.

According to Statistics Korea on Tuesday, consumer prices for all of 2019 grew 0.4 percent compared to a year earlier. This is the lowest rate recorded since data started to be compiled in its current form in 1965.

This is lower than the previous low of 0.7 percent set in 2015 during the spread of the deadly Middle East Respiratory Syndrome and 1999’s 0.8 percent, when the country was being buffeted by the Asian economic crisis.

The biggest contributor was considered to be petroleum prices.

In 2019, petroleum prices were down 5.7 percent compared to the previous year, a stark contrast to 2018, when prices were up 6.8 percent.

The government cited a sharp drop in international crude prices. Dubai crude prices fell 10 percent last year compared to the previous year from $70 per barrel to $63.

Throughout the entire year, inflation remained below 1 percent and even fell to 0.4 percent in September.

This is the longest stretch that consumer prices grew below 1 percent in two decades.

The last time inflation grew below 1 percent for an extensive period was in the eight months between February and September 1999.

Even core inflation - which excludes more volatile food and energy prices - grew at only 0.9 percent, which was the lowest level since 1999.

The problem with deflation is that the economy goes into a downward spiral as companies cut back on production and consumers, expecting prices to drop further, delay their spending.

The government continues to wave away worries about deflation and insists on a recovery of inflationary forces next year.

“Currently we are not worried about deflation,” said Lee Doo-won, Statistics Korea director for consumer prices.

“We expect consumer prices to rise starting next year as several manufactured product prices will be raised while the lower prices of agricultural goods and petroleum goods compared to the previous year will end.”

Consumer inflation grew for the third consecutive month in December.

Last month, consumer prices grew 0.7 percent year-on-year, which is an improvement from 0.2 percent growth in November.

The increase was largely driven by hikes in utility bills as well as manufactured goods.

The government is targeting 1 percent inflation next year.