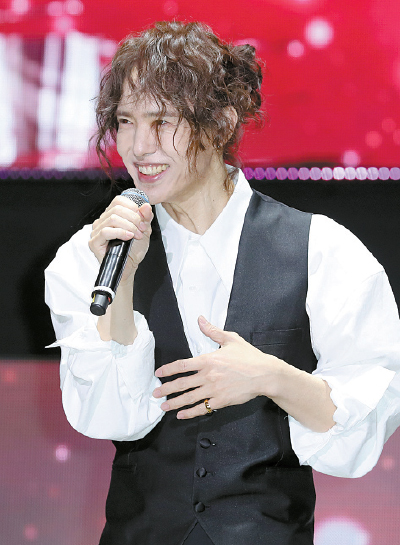 Singer Yang Joon-il, also known as V2, met with fans through two official fan meet events on Tuesday at the Daeyang Hall on the campus of Sejong University.

“Are you all really here to see me?” Yang said, tearing up with joy.

“I’m so surprised. This is my first time. I really didn’t imagine any of this. I’m so grateful. Honestly, I’m confused whether I’m getting mixed up with the images in my head.”

Yang debuted in 1990 but failed to gain the spotlight despite his passion and talent. He had tried to start a career in the United States but failed yet again due to his contract with his agency.

He recently gained attention through JTBC’s “Sugarman 3” - a program dedicated to finding and rediscovering old singers from the past - and held his fan meeting event in order to return the love from his fans.

“Just a week ago, I was a server at a restaurant. I can’t believe you’re all here to see me,” he said.

He recently shot a commercial with Lotte Home Shopping, and JTBC is preparing a Yang Joon-il special to air soon. Suddenly, Yang’s career seems to have taken off.

“I’m planning on a book,” he said. “I’d also like to make a new album from all the past songs and rearrange them.”