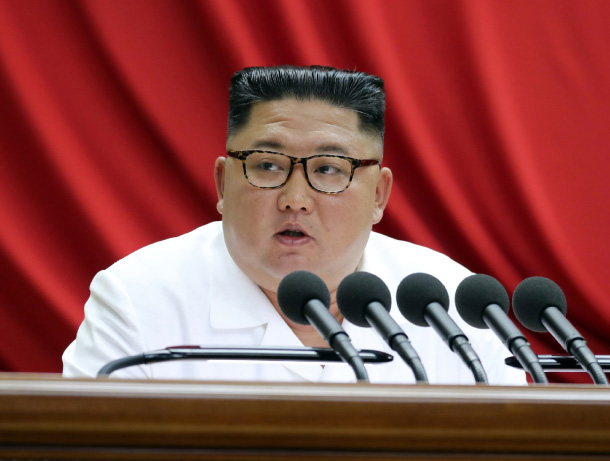 North Korean leader Kim Jong-un speaks to the 5th plenary session of the 7th Central Committee of the Workers’ Party for a third-day meeting on Monday. [YONHAP]

North Korean leader Kim Jong-un on Monday urged his government to prepare “positive and offensive political, diplomatic and military countermeasures” to protect the country’s sovereignty as the ruling Workers’ Party held a Central Committee plenary meeting for a third day.

According to the official Korean Central News Agency (KCNA), Kim continued on from his address to the committee on Sunday, expounding further on “state building, economic development and building of the armed forces” in a speech that lasted seven hours.

Few specific details, however, were provided as to what such measures entailed, leaving observers in the dark as to the regime’s next move as the year closes with almost nothing to show for its denuclearization negotiations with Washington.

KCNA added the plenary session was to produce a “draft resolution” and would continue for a fourth day on Tuesday, making the conference the longest Central Committee plenary meeting to take place in almost two decades since a five-day session that took place in January 1990.

Kim is expected to deliver a New Years’ address on Wednesday that may take the form of a recorded message broadcast through state television, as in previous years, or a speech directly made to members of the ongoing plenary meeting, given the session’s unusually long duration.

Just as he affirmed his commitment to “complete denuclearization” in his New Years’ address for the outgoing year, his 2020 speech is likely to contain a message aimed at the United States now that Kim’s publicly proclaimed year-end deadline for talks has expired without any resolution.

The focus on economic issues at the plenary meeting - and Kim’s determination to achieve a final victory in “another arduous and protracted struggle” - suggests North Korea may reverse course and end its dialogue with Washington while gearing up to endure economic sanctions for an extended period of time.

While experts say it is doubtful Pyongyang will risk a major provocation to accompany this announcement, some measure of aggression is anticipated in light of the regime’s repeated warnings so far.

In the meantime, however, the regime may have enlarged and extended its party plenary meeting with the purpose of biding time in order to observe responses from the United States and the international community, particularly in light of what appears to be support coming from its allies in China and Russia.

On Monday, the United Nations Security Council convened an informal meeting to discuss a Russian and Chinese-backed proposal submitted earlier this month that would lift some sanctions on the North Korean economy. While the measure is almost certain to be shot down by other members of the Council, analysts say it could embolden Washington to accelerate its negotiations with Pyongyang to prevent a unified international front opposed to the North’s nuclear program from falling apart.

And perhaps as intended by the North, Washington too responded to the North’s latest moves with its own public messages this week intended to dissuade the regime from taking drastic action.

On Monday, U.S. Secretary of State Mike Pompeo went on Fox News to warn Pyongyang that the Donald Trump administration was “closely” watching the country, including this week’s plenary meeting, but that Washington remained open to maintaining a diplomatic solution.

“We maintain our view that we can find a path forward to convince the leadership in North Korea that their best course of action is to create a better opportunity for their people by getting rid of their nuclear weapons,” Pompeo said.

“We’re watching what they’re doing here in the closing days of this year, and we hope that they’ll make a decision that will lead to a path of peace and not one towards confrontation.”

The secretary’s remarks followed those made by White House National Security Adviser Robert O’Brien on Sunday, in which he said Kim was facing a choice between a “glorious path” for his people or “the road of sanctions and isolations and being a pariah state.”

However, O’Brien warned Pyongyang that if it undertakes something like an intercontinental ballistic missile test, “the United States will take action, as we do in these situations,” with a range of “tools in the toolkit” to put additional pressure on the regime.

By contrast, when asked by the anchors if North Korea’s obstinacy would prompt a change in the administration’s engagement policy, Pompeo said the United States will “continue to work down this path” of dialogue and that he was hopeful Pyongyang would make the right choice.