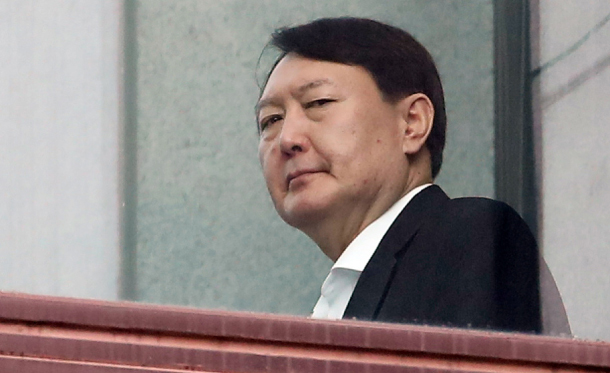 Prosecutor General Yoon Seok-youl promised a crackdown on any attempts by public servants to influence the April general election campaign, a message of defiance following the passage of a law that splits indictment powers between prosecutors and a new investigative agency.

On Monday evening, the ruling Democratic Party (DP) and its allies railroaded a controversial bill to establish a new agency to investigate senior officials, a top goal of President Moon Jae-in.

Since taking office in May 2017, Moon, his aides and the DP have tirelessly pushed the new agency, along with other attempts to weaken the prosecution’s powers.

A package of bills to revise the Criminal Procedure Act and the Prosecutors’ Office Act, aimed at redistributing investigative powers between the prosecution and police, are expected to be voted on in early January.

While the Supreme Prosecutors’ Office did not issue an official response after the new agency plan was passed, Yoon issued a New Year’s message on Tuesday to prosecutors. In the message, Yoon issued a de facto warning to politicians in general - and the administration.

“The 21st National Assembly election takes place in 2020,” Yoon said. “We have to fully prepare for all election crimes that involve money, lies and public servants’ intervention in elections.

“In an election crime case, political neutrality of the prosecution doesn’t mean an artificial, mechanical balance,” he continued.

“If anyone plays foul or breaks laws to distort the people’s political choice by using money or power, you need to thoroughly investigate it and sternly counter it.”

In the message, Yoon stressed that the prosecution has carried out bold and proactive reform measures since he took office in July 2019 and will not stop reforming itself until it regains public trust.

While major changes are expected in the criminal justice system, Yoon said, “We still have to do our best as prosecutors to serve the people and make sure that the state’s capability to counter corruption, irregularities and crimes that affect the people’s livelihoods won’t be weakened.”

Yoon also urged prosecutors to root out unfairness in politics and the economy, help the socially and economically weak and respect human rights during investigation and indictment procedures.

Warning that prosecutors will face another tough year in 2020, Yoon promised to support them.

“No matter how hard the conditions you are in, public servants must do their best to complete their responsibilities with an attitude to serve the people,” Yoon said. “As the prosecutor general, I will support you for serving the people based on the constitution and protect your rightful convictions.”

Meanwhile, sources close to the administration said the new investigation agency for senior officials will start in July. The new agency is the first state organization allowed to take over some of the prosecution’s indictment powers.

It will have investigative powers over 6,500 senior officials including the president and his or her immediate relatives; senior presidential aides; the National Assembly speaker and lawmakers; the Supreme Court chief justice and judges; the Constitutional Court chief justice and judges; the prime minister, ministers and vice ministers; judges; the prosecutor general and prosecutors; mayors, governors and education office chiefs; and senior police and military officers.

The agency is given indictment powers over the Supreme Court justices, the prosecutor general, judges, prosecutors and police officials, making clear that the prosecution won’t be able to protect its own members from indictment anymore.

The head of the new agency will have a three-year tenure. A seven-member recommendation panel will propose two candidates, and the president will name one as the head. The appointment does not require the legislature’s approval, although a confirmation hearing will take place.