Park decided to win big rather than retire quietly

Park decided to win big rather than retire quietly 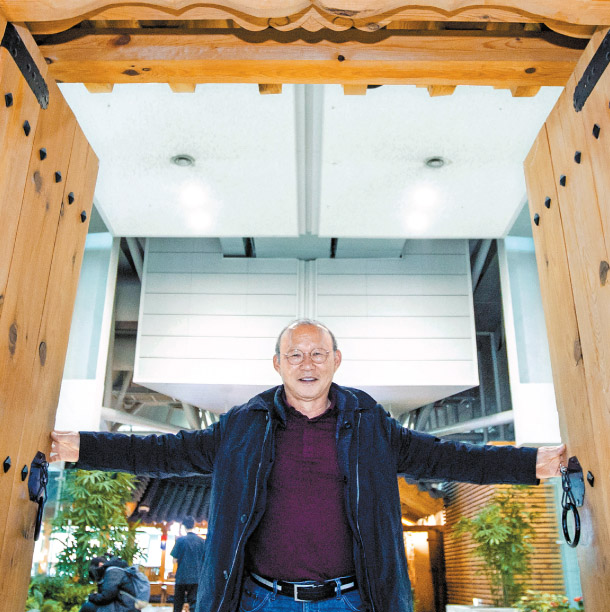 In 2020, Vietnam head coach Park Hang-seo hopes for another miracle by leading the U-23 team to qualify for the 2020 Tokyo Olympics. [KIM SUNG-RYONG]

Park Hang-seo, the head coach of Vietnam’s football team, has had his ups and downs throughout his coaching career, and has finally reached his peak at age 60.

In 2002, when Korea advanced to the semifinals at the FIFA World Cup, Park became one of the stars as he served as the assistant coach of the historic national team under head coach Guus Hiddink.

Continuing the success, Park was appointed as the head coach of Korea’s U-23 football team for the 2002 Asian Games, but as the team failed to win gold, his popularity and the glory of World Cup faded. He was quickly forgotten. Due to this, he resigned only after three months. He coached K League clubs for a while, but eventually he had to accept a head coaching job for a club football team.

Right when he thought that he was heading to his retirement, at age 57, he was given another chance: to coach the Vietnamese football team. As Southeast Asia isn’t a popular destination for football, being the head coach for Vietnam’s senior and the U-23 football team could have been a risky move. It could have ended his career without anyone knowing it, but Park didn’t hesitate to take the gamble.

On September 2017, Park headed to Vietnam. This changed everything.

“I slowed down and started to look around me,” Park said. “Once I did, I was able to see a path - an easier and a faster one.”

Not many believed that he would see success in Vietnam - instead, he would just end his career there, but Park gave it his all with the young team. As a result, just few months into coaching the team, Park led the Vietnam’s U-23 team to a surprising final at the 2018 AFC U-23 Championship.

Then at the Asian Games last year, Vietnam advanced all the way to the semi-finals, the best finish ever in the country’s history, and to finish off the year, he led the team to win the Suzuki Cup, once again for the first time ever.

This year, Park continued his magic by winning the country’s first-ever gold medal at the Southeast Asian Games. From his three successful years, Park recently re-signed his contract with the Vietnamese football association, reported to be the biggest contract ever for a coach in Vietnam. At age 60, he is having the busiest time of his life, but Park said he feels more relaxed than ever.

“I’ve only looked forward throughout my whole life,” Park said. “But once I headed over to Vietnam, I’ve learned an important lesson. I’ve slowed down and looked around. I was worried that I might be falling behind, but that wasn’t true.”

Following Park’s success, fans have called it the “Park Hang-seo magic,” but behind the success, he always pointed out the hard work of his players and his coaching staff, instead of himself. He once made headlines for his “papa leadership,” where he was spotted massaging the players’ feet after a match.

With the Vietnam football team, Park always emphasized being “one team,” where both the players and the coaches think from each other’s perspectives.

“When a head coach thinks like a player and the player thinks like a head coach, nothing can go wrong,” Park said. “In order to make one team, everyone has to make sure that we are the priority rather than themselves. Within that policy, they are given freedom. They need to feel the responsibilities and their roles.”

Playing as one team, Vietnam has won more matches under Park and set some historic records, but at the same time, there were matches they’ve lost. In matches they lost, Park points out to the players that it is more important to lose well and to learn from it.

“If we win once, a lot of people compliment us, but we shouldn’t get excited about that,” Park said. “Popularity and honor can disappear at any second. [I’ve] experienced it in 2002. A match that I prepared for a long time, after staying up all night for days, ends in just 90 minutes. We also get the result. When we won the Suzuki Cup last year, the country was going crazy, but we have to compete at the Suzuki Cup again [this year]. Once our challenge to win the tournament is completed, we’ll have another challenge, this time, to retain it. So when we lose, we need to lose well. We need to look into what we can learn from it.”

In addition to working to achieve a goal every year, before heading into every match, Park believes that his team can win and makes sure that the players also believe that they can win. Park said once he starts doubting the team’s win, then the players will never win, no matter what he says to encourage the players.

“If I think it’ll be hard to win, then our players will never win,” Park said. “We played against Australia on a snowy day and there were some players who saw snow for the first time that day. But I gave them the certainty that we can win by telling them that we’re at an advantage on a slippery field because we have lower balance for being smaller. Soldiers can’t fight if their generals don’t have the certainty that they can win. If offense doesn’t work, then I’ll have to think of a defensive strategy. I have to find a way to give certainty to the players that we can win.”

Despite Park’s success in Vietnam over the past three years, he didn’t forget the help of the other coaches. He emphasized that it’s important to get over the thought that he can do everything by himself.

“For all the teams, to see the result they want, everyone has their roles and responsibilities,” Park said. “I’ve been in the field of football for quite some time, but I’m not an expert in all the areas. I can’t just trust my own experience. My role as the head coach is to make a reasonable decision based on the advice I get from experts on our team, like nutrition, physical coach, rehabilitation and strategies.”

Having achieved most of his goals to become the best in Southeast Asia, Park has now set his sights on another miracle - to lead Vietnam to its first-ever appearance at the Tokyo 2020 Olympics and to advance to the final qualifier in the 2024 FIFA World Cup in Qatar.

“We’ve overcome Southeast Asia,” Park said. “We’ve been trying our best within the situation we’re in, but we’ll reach a point where hard work won’t be enough to achieve our goal. Rather than just running forward, right now, it’s time where we need to learn and realize what our weaknesses are and how to strengthen them.”

“We’ll compete, but we’ll also work together,” Park said. “Rather than being each other’s enemy, we’ll consider ourselves as partners.”