Although MBC’s drama offerings failed to breakthrough and find a large audience in 2019, the channel’s annual entertainment awards ceremony, which aired live on Sunday, recorded the highest ratings amongst the three terrestrial broadcasters due to the success of MBC’s entertainment programming throughout the year.

After having been nominated for the channel’s Grand Prize three times in the past, comedian and entertainer Park Na-rae finally took home the event biggest award. 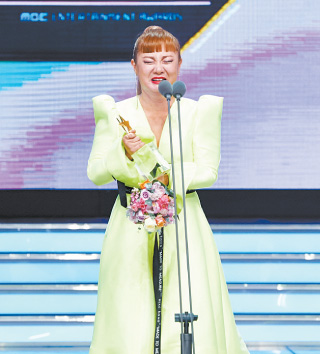 “Honestly, I [initially] thought that this prize couldn’t ever be mine,” Park began with tears streaming down her face. “But I wanted it so bad (sobs). I’m only human.”

Park received the Rookie Award for Variety in 2015 and has been clutching top prizes for various entertainment shows. The 2019 Grand Prize was given to her for her contribution as the main host of the long-running hit MBC variety show “I Live Alone” and the new program “Where is My Home.”

Upon receiving the Best Entertainer Award, Jang revealed that this was her first-ever award from any of the three main broadcasters.

“I was just sitting over there [by the seats], staring here [at the stage] and I realized that there are only five stairs to get over here,” Jang said. “But it took me 13 years to climb up these last five stairs.”

While accepting the Top Excellence award in Music & Talk, entertainer Kim Sook mentioned that it was her first time attending the MBC award ceremony in her 25-year career.

Veteran entertainer Yoo Jae-suk received the Rookie Award for Variety as Yoo San-seul, Yoo’s stage name as a trot singer. Yoo the singer rose to popularity on the MBC variety show “Hangout With Yoo” which began airing last year, creating hit songs such as “Hapjeong Station, Exit No. 5” and “The Reconstruction of Love.”

The long-overdue awards given to female entertainers show how thick the glass ceiling in the entertainment industry remains despite efforts to push for more representation while recognizing achievement.

At the SBS Entertainment Awards on Saturday, entertainer Kim Gu-ra sharply criticized the obvious, yet discreet, tradition of various award ceremonies nominating the same entertainers year after year. Kim was nominated amongst eight candidates for the Grand Prize.

“I worry that viewers may actually be convinced that I am a worthy candidate [for the Grand Prize] even when I’m not convinced that I belong here,” Kim said when he was asked if he thought he had a shot at taking home the top prize.

“I think it’s about time that award ceremonies abandon their old ways of wasting prizes on long-running programs. I know that KBS [Entertainment Awards] failed to get high ratings [this year]. The three CEOs [of the major broadcasters] should meet up and take turns giving prizes [to those who actually deserve it]. I know that they are sticking to the old format just because of advertisements.”