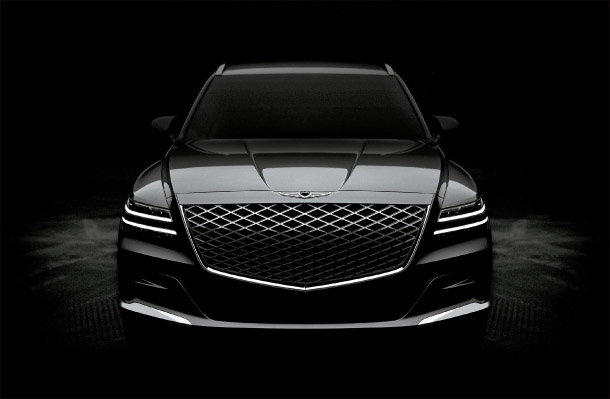 Hyundai Motor released images of the first SUV from its luxury Genesis brand on Wednesday and said the new vehicle would be equipped with the latest autonomous driving and noise control technologies.

Dubbed the GV80, the model is set to hit the market this month, though the debut was initially planned for November last year.

To build on the success of Genesis predecessors, the automaker said that it focused on furthering luxury elements on the exterior while featuring enhanced functionality inside.

The key design elements of the rear-wheel drive GV80 include the front grille being flanked by quad lamps, which wrap around the corners of the car.

The side is designed using what Hyundai Motor calls the “parabolic line,” achieving “athletic elegance.”

G-Matrix, a Genesis signature feature inspired by light reflecting from an illuminating diamond, is utilized in the headlights.

The crossover features a set of new technologies Hyundai is introducing.

Hyundai’s advanced noise control system will be installed, too, for the first time.

The Road-noise Active Noise Control (RANC) system analyzes outside sound in real time and produces offsetting waves to make the inside of a car quieter, the largest automaker by sales in Korea said.

It utilizes a digital signal processor to generate offsetting sound waves through the audio system based on readings taken of noise levels in the vehicle.

Another notable point is a navigation system powered by augmented reality to give a realistic sense of the road. It will provide a real-time view from cameras.

The automaker also incorporated a payment solution into the GV80’s navigation display. When connected with a user’s smartphone app, the driver can directly make payments on the navigation system without taking out their smartphone.