[NEWS IN FOCUS] Stuck between the past and the future

[NEWS IN FOCUS] Stuck between the past and the future

Last year might someday be seen as the beginning of the end for global automakers.

While the trends have been apparent for some time, they became unavoidable in 2019. Overcapacity, a lack of consumer interest, continued economic weakness and uninspired designs hit sales and profits hard.

The rubber may have finally hit the road.

Korea was no exception. All the major automakers in the country battled market malaise, consumer fatigue and economic realities that could no longer be ignored. The numbers suggest more than just a blip. They seem to indicate a long-term secular shift.

“The age of expecting expansion in size and profits from industry growth has come to an end,” said Kim Min-young, an analyst at Mirae Asset Daewoo. “Cars have gone from absolute necessities into free consumables; demand driven by need has fallen, and the products are now more considered luxuries.”

The business is fighting back. Much of what it is doing is old hat.

For most, more “launches” and a dizzying array of face-lifts, all-news and unveilings are the answer. They are doubling down on the strategy that got us here in the first place, with the numbing product cycle seen as a solution rather than the problem.

The other theme is the future. Automakers are setting their sights on high-tech mobility and financing their visions with huge sums of money. They are also setting timelines that could result in real, material sales in just a few years, taking what are now boutique businesses to drivers of growth by the middle of this decade.

In the background is a trend that has been little noticed but could make a real difference. Labor, while still active, is becoming more pragmatic. Unionized workers are now starting to see that no cars equal no jobs, and adjustments in strategies and tone are starting to follow.

According to the Korea Automobile Manufacturers Association, aggregate sales for these companies from January to November dropped 3.7 percent on year to 7.23 million units. 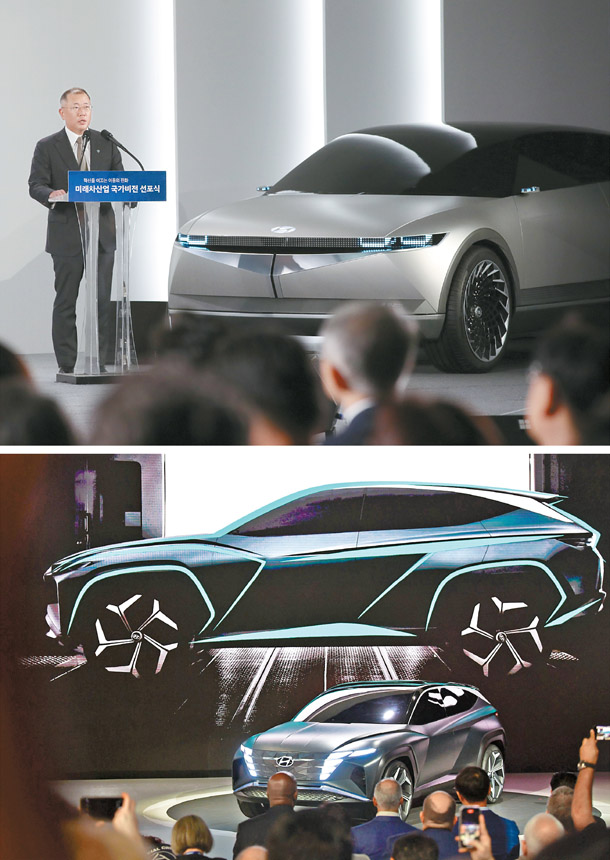 The automobile market in Korea has no doubt been a victim of global trends.

Peak car is hitting it hard. With the world markets saturated and consumers globally stretched, automobile companies are struggling wherever they may be. Local factors are also weighing on the business. With GDP growth in Korea barely breaking 2 percent, or possibly not, in 2019, it was difficult to move vehicles off the lots.

SsangYong Motor, 72.9 percent-owned Mumbai, India’s Mahindra & Mahindra, is the exception, having concluded wage agreements successfully for 10 years running. But all other local automakers are still battling with labor.

At GM Korea, wage negotiations collapsed in October, and walkouts are possible this year, while an aggressive leader in favor of strikes was voted to head its union last year. In mid-December, unionized workers from Kia Motors voted down a tentative agreement reached earlier that month and held partial strikes for three days. The union is adamant, as it is refusing to re-enter negotiations with management until Jan. 3.

Renault Samsung Motors has been dogged by strikes by since late 2018, and production has fallen precipitously. It finally agreed with union on 2018 wage levels in June 2019, but conflict remains over wages and working conditions. The union has been asking for an increase in base pay and bonuses, along with a promise for new hires.

Hyundai Motor managed to reach an agreement with labor, but tensions remain and layoffs are still possible.

“Labor disputes are definitely one of the main factors harming prospects for success,” said Kim Pil-soo, an automotive engineering professor at Daelim University. “If workers are on strike, cars can’t be made. The hostile relations will remain, and the struggle will deepen this year.”

In the face of market weakness, local automakers are focused on releasing new models to draw consumer interest.

In part, this is just a matter of habit. They’ve been doing it for years, so it makes sense for them to make their bet on the strategy again for another year.

But it is also a response to changing demographics, with a whole new generation coming of age and into the market.

“The year 2020 is important as consumers born in the 2000s are entering the new vehicle market,” said Moon Yong-kwan, an analyst at Shinyoung Securities.

“For them, sedans, not SUVs, could be the ‘tattoo’ that can satisfy their unique needs.”

Hyundai Motor Group, including Hyundai Motor, Kia Motors and Genesis, is introducing a total of seven newly designed vehicles. Genesis is coming to the market this month with its first SUV: the GV80. Hyundai Motor and Kia Motors will be offering the new Sorento SUV and an upgraded K3 sedan while also bringing out new versions of the Tucson SUV, the Santa Fe SUV, the Carnival van and the Stinger sedan.

With those new models, analysts are expecting a turnaround at Hyundai Motor Group.

Renault Samsung Motors is also releasing a number of new models. The automaker plans to introduce the second-generation Captur SUV, which is a fully updated version of the QM3 SUV, and the ZOE electric car in the first half, after releasing the XM3. The company is also preparing to launch upgraded versions of the SM6 sedan, the QM6 SUV and the Renault Master van.

GM Korea has plans for the Chevrolet Trailblazer, newly designed and upgraded, in the first quarter this year. The cheapest SUV model for the Chevrolet lineup is going to be manufactured at the company’s Bupyeong plant in Incheon.

SsangYong Motor is the only local automaker that has no plans for new models, as the company is more focused on improving its financial structure.

In the background, the labor situation may be improving a bit.

While the industry is still burdened by tension with the unions, a sense of pragmatism is starting to influence future discussions, given the weakness in the business and the unavoidable reality that the wage level in the automobile industry is far higher here than in most other markets globally.

The Hyundai Motor union has elected a new leader known to favor practical solutions over hard-line protests, a major shift for an automaker that has regularly faced trouble from disputes with labor.

“Electing a moderate labor union chief certainly brings a lot of hope for the local auto industry,” said Daelim University’s Kim. “Hyundai Motor Group is leading the Korean auto industry, and that group moving in a peaceful direction with the union could mean better fortunes in 2020.”

Lee Sang-soo, the new labor chief, seems to be aware of the harsh reality. He wants to work with the possible rather than demands that cannot be delivered. He recognizes that mass layoffs could happen at Hyundai Motor, which was told in October by an advisory committee to cut its workforce by up to 40 percent, or 10,000 workers, by 2025 to keep its head above water.

Even at Renault Samsung Motors, where labor has been increasingly aggressive, enthusiasm is waning. Hard-line labor actions are losing popularity among the workers, with the participation rate for partial strikes falling from 40.1 percent on Dec. 23 to 32.9 percent in Dec. 26. 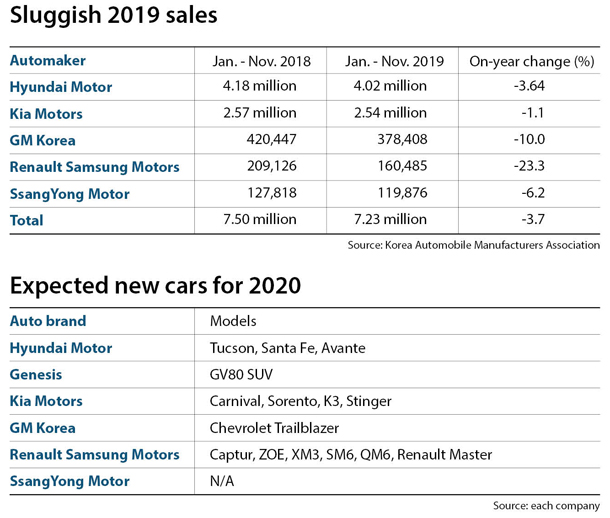 New models and peace with labor might help in the near term, but the big bet is on the mobility revolution. Korean automakers, like their global counterparts, are hoping that cleaner, smarter cars will drive demand in the future and lift the business out of its funk.

Since 2017, 12 countries, including France, Britain, Sweden and China, have announced they will ban fossil fuel vehicles from being operated in their countries by 2050 at the latest.

The phaseout measures have been coming as the countries are looking to meet environmental targets promised in international climate agreements that call for signatories to reduce carbon emission levels and shift to more eco-friendly energy sources.

In preparing for such a dramatic change, Hyundai Motor Group has been investing heavily in future vehicles and upgraded mobility solutions. It ultimately seeks to transform itself from an automaker to a mobility solutions provider that also sells environmentally-friendly vehicles.

Hyundai Motor Group announced early last month that it will commit 61.1 trillion won ($53 billion) into research and development to become one of the world’s top three electric vehicle (EV) manufacturers, an achievement it turned out it had already reached by November 2019. By 2025, it plans to achieve 670,000 battery and fuel-cell EV sales per year. Also by the same year, it seeks to equip all of its models with Level 2 and 3 automation and advanced driver assistance programs for parking.

In September, Hyundai Motor Group announced it will invest $2 billion into establishing a joint venture with Dublin-headquartered Aptiv to develop its autonomous driving software. The group ultimately seeks to commercialize self-driving cars by 2024 and flying cars by 2025.

Others are also following the trend.

SsangYong Motor said in a statement in October that it is considering developing EVs and connected cars. Renault Samsung Motors is teaming up with LG Chem to develop an energy storage system using used electric car batteries.

GM Korea’s parent company, General Motors, and LG Chem are investing up to $2.3 billion through 2023 to form a joint venture in the United States for the production of EV battery cells. Located in Ohio, the facility will be the largest battery cell factory in the world. Construction is scheduled to begin in the middle of this year.

Even with new models and big investments for the future, analysts believe that the struggle may continue for local players in 2020. The overall trend is just too strong.

“Since 2017, global automobile demand has continuously fallen,” said Nam Jung-mi, an analyst at Yuanta Securities. “It is expected that the global car demand fell 3.7 percent on year in 2019 from declining demand in major auto markets like the United States, China and Europe.”

Global manufactures are caught between car generations, with the internal combustion engine being regulated out of existence before alternatives have a chance to be perfected and fully accepted.

“We expect the global trend of falling demand for automobiles is going to continue next year,” Nam added. “Sale figures for fossil fuel vehicles will especially be affected from the slowing automobile demand and environmental regulations.”