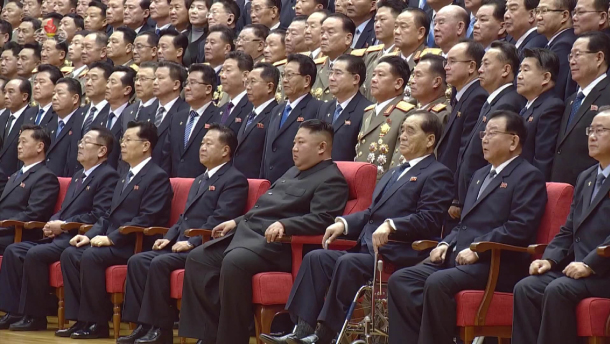 North Korean leader Kim Jong-un proclaimed Pyongyang will no longer be bound to a self-imposed moratorium on nuclear and intercontinental ballistic missiles (ICBM) and would unveil a “new strategic weapon” soon.

In a long-anticipated address delivered on the last day of the 5th plenary meeting of the 7th ruling Workers’ Party Central Committee, Kim unleashed a bitter condemnation of the United States for throttling the North Korean economy with sanctions, a posture that he said reflected a “hostile policy” that failed to respect its suspension of nuclear and ICBM tests in 2018.

“Under such condition, there is no ground for us to get unilaterally bound to the commitment any longer, the commitment to which there is no opposite party, and this is chilling our efforts for worldwide nuclear disarmament and non-proliferation,” Kim said.

Kim vowed to bolster his country’s military muscle and build a “powerful nuclear deterrent capable of containing the nuclear threats from the United States and guaranteeing our long-term security,” though the “scope and depth” of that buildup “will be coordinated depending on the U.S. future attitude.

“The world will witness a new strategic weapon to be possessed by the DPRK in the near future,” Kim added, noting that Washington’s “impudent” stance vis-a-vis their negotiations has impelled the regime to “shift to a shocking action to make [the United States] pay for the pains sustained” by its people.

The DPRK is an acronym for North Korea’s official name, the Democratic People’s Republic of Korea.

The speech represented the North’s long-awaited response to the expiry of its year-end deadline for a change in attitude by Washington.

Analysts and officials in South Korea and the United States had predicted the North would revoke its moratorium on nuclear and long-range missile tests as a pressure card at the year’s end, though the address did not extinguish the possibility of diplomacy going forward.

According to Cheong Seong-chang, a leading North Korea researcher at the South’s Sejong Institute, Kim’s words mean the regime has effectively abandoned nuclear negotiations for the moment and will be focusing its efforts on building on its nuclear, ICBM and submarine-launched ballistic missile (SLBM) arsenal to compel the United States to yield in some way.

The reference to a “shocking action” means Pyongyang could test a long-range missile or SLBM from a new submarine within the year, Cheong said.

Equally notable, however, was the lack of personal attacks on U.S. President Donald Trump, whose decision to walk out of the second summit with Kim in Hanoi, Vietnam, last February derailed the closest attempt the North has gotten toward achieving its aim of sanctions relief.

Some observers noted the fact that Pyongyang did not conduct a surprise ICBM launch at the year’s end - in spite of its relentless accusations of Washington lacking interest in a resolution. That may testify to the regime’s lack of options and the fact that a long-range missile could force the United States to consider military options.

Suggestive of this caution are Kim’s remarks painting his decision as a last resort of sorts. An ensuing atmosphere of hostility with the United States meant his country could no longer shun its security concerns “just for the visible economic results and happiness and comfort,” the dictator said.

If North Korea does not “put spur to the struggle for bolstering the power for self-development while waiting for the lift of sanctions, the enemies’ reactionary offensive will get fiercer to check our advance,” Kim added, calling on party cadres and state officials to focus their efforts on ensuring Pyongyang’s economic “self-reliance.”

And as he did in a seven-hour address during the previous day’s plenary meeting, Kim warned of “another arduous and prolonged struggle” with the United States, which he said made it a “fait accompli that we have to live under sanctions by hostile forces.” Taken together, these repeated vows to fight on appear to outline the “new path” that Kim promised he would take in a New Year’s speech in 2019 if his demands were not met.

The response from Washington to Kim’s newest saber-rattling was relatively calm, with U.S. President Donald Trump telling reporters on Wednesday he believed Kim would stick to his promise not to conduct nuclear and long-range missiles.

“He did sign a contract, he did sign an agreement talking about denuclearization,” Trump said. “That was done in Singapore, and I think he’s a man of his word, so we’re going to find out.”

U.S. Secretary of State Mike Pompeo likewise had an air of optimism during an interview on CBS on Tuesday evening, Eastern Standard Time.

Claiming Washington had lived up to its commitments to the North, Pompeo added, “If Chairman Kim has reneged on the commitments he made to President Trump, that is deeply disappointing.”

The secretary did not elaborate as to what commitments the United States has honored with the North, given there was little in the way of practical promises when the two countries signed an agreement in the first Trump-Kim summit in Singapore in June 2018. Pyongyang blames Washington for failing to uphold a pledge to build peaceful ties by continuing to impose strong international and domestic sanctions on the North’s economy.

In Seoul, where officials had been gearing up for the worst at the year’s end, Kim’s statement was received with relative relief because Pyongyang did not rule out dialogue altogether.

A statement released by South Korea’s Ministry of Unification, Seoul’s top inter-Korean government body, on Wednesday said it was positive that the North did not give up on diplomacy, adding that U.S.-North Korea dialogue could resume.

“An attempt by North Korea to follow through with action on its warning to test a ‘new strategic weapon’ will not help denuclearization negotiations and make it difficult for peace to settle into the Korean Peninsula,” the statement read. “The government will do its best to help produce practical results in denuclearization talks and will do its part to implement a series of inter-Korean military trust-building agreements.”

Officials in Seoul were also puzzled by the irregular series of public events in the North, especially the regime’s decision to make Kim’s objectives for the future known through his speech at the plenary meeting rather than his yearly New Year’s address.

The supreme leader’s speech at the New Year is regarded as a highly momentous occasion in North Korea, where children and adults alike are taught to memorize the address once it is publicly broadcast on state television and published in official newspapers.

Last year, Kim departed from tradition to deliver the address more informally, seated in a leather chair in his office, with portraits of his father and grandfather at his flanks.

Unification Ministry officials said while that address is usually made in the morning of New Year’s Day, this year it could come at a later hour in the afternoon, or - almost unprecedentedly - not at all.