The Justice Ministry honors four model naturalized Koreans in a ceremony on Dec. 18, 2019, at the government complex in Gwacheon, Gyeonggi, as the number of naturalized Koreans reached 200,000 as of 2019. From fifth from left, holding an award, is Do Eun-a from Vietnam, a counselor at the Bucheon Migrant Workers House; Wang Gye from Taiwan, a curator at the Korea National Park Service; Vice Justice Minister Kim Oh-soo; Kim Hye-mun from China, who works for the Gwangju Metropolitan Government; and Jang Je-han from Nepal, a family medicine doctor at Gyeongju Municipal Geriatric Hospital. [JUSTICE MINISTRY]

After acquiring Korean nationality in 2014, Dr. Rajesh Chandra Joshi wants to give back to his adopted land by being “a doctor who shares happiness with the people.”

The Nepal-born Joshi, head of the department of family medicine at the Gyeongju Municipal Geriatric Hospital in North Gyeongsang, was selected by the Ministry of Justice as an example of a model naturalized Korean.

“After studying at Seoul National University, I got a job and married in Korea,” says Joshi, who has adopted the Korean name Jang Je-han. “I want to be a productive citizen of Korea as it has been such a blessing for me.” 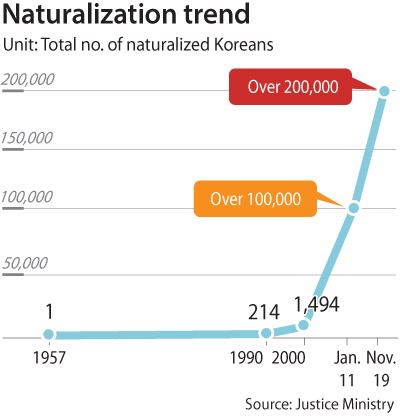 The number of naturalized Koreans has surpassed 200,000 since 1957, when Taiwanese Son Il-seung became the first foreigner to adopt Korean nationality after the establishment of the Republic of Korea government.

The average number of foreigners who took Korean nationality annually was around 33 until 2000, when it started shooting up. The total number of naturalized Koreans reached 100,000 in January 2011 and 200,000 as of the end of November.

About 22,153 foreigners applied for Korean citizenship in 2018, and of them, around 65 percent succeeded.

On Dec. 18, the Ministry of Justice held a ceremony to honor four naturalized Koreans who are model citizens.

Do Eun-a, who came from Vietnam, is the mother of twins. Do adopted her Korean name and acquired Korean nationality in 2009. She is currently working as a counselor in the Bucheon Migrant Workers House in Gyeonggi. She has been devoting herself to the welfare of migrants.

David Jonathan Linton, left, a lawyer from the United States; and Umida Muhiddinova from Uzbekistan, right, who works at Seoul National University Hospital, with her son are naturalized Korean citizens. [CHANG SE-JEONG]

“When I first came to Korea, I had such a hard time overcoming cultural differences,” Do said. “If patience and diligence are Koreans’ strengths, their lifestyle dedicated to chasing money is their greatest weakness.”

According to data provided by the Ministry of Justice, foreigners who gained Korean citizenship come from 110 different countries.

“I like eating garlic and cheonggukjang [a soup made with fermented soy bean paste],” the U.S.-born Shachat said. “I decided to become a naturalized Korean as I have been through thick and thin with this country.”

With the help of the Ministry of Justice, the JoongAng Ilbo was able to meet several naturalized Koreans.

“The greatest strength of Korean society is talented and resourceful Koreans. However, its greatest weakness is a government that puts too many restrictions on people,” David Jonathan Linton, 48, a U.S.-born lawyer, said. “My personal income tax nearly doubled as soon as I became a Korean citizen.”

Umida Muhiddinova, 39, from Uzbekistan, is currently working as a medical checkup coordinator at Seoul National University Hospital’s center in southern Seoul. Muhiddinova first learned about Korea through the famous TV series “Winter Sonata” (2002) and married a Korean doctor in 2005.

“I will participate in the general election that takes place in April and future presidential election as well,” said Muhiddinova.

Another naturalized Korean, Park A-reum, who came from Mongolia and uses a Korean name, is a working mom raising a son and daughter both in elementary school. She is an instructor at a day care center in Gwangmyeong, Gyeonggi.

“I became naturalized despite my parents’ opposition because I wanted to be a Korean mother to my children, not a foreign one,” said Park.

Some naturalized Koreans criticized their adopted country’s lack of understanding of multiculturalism and internationalism.

“I came from China, and I regretted my decision at times because of Korean society’s prejudice against China,” Kim Hye-mun, 51, who now works at the Gwangju Metropolitan Government, said. “I hope the Korean people will judge us fairly in the future.”

Alok Kumar Roy, 64, a professor of Indian studies at Busan University of Foreign Studies, came to Korea in 1980. He was chosen to study in Korea with the government’s financial support. After 31 years, he acquired Korean nationality in 2011.

“Instead of just accepting lots of people from different countries, I hope Korea develops a fair and integrated multiracial society and becomes a developed country by accepting more global leaders,” said Roy.