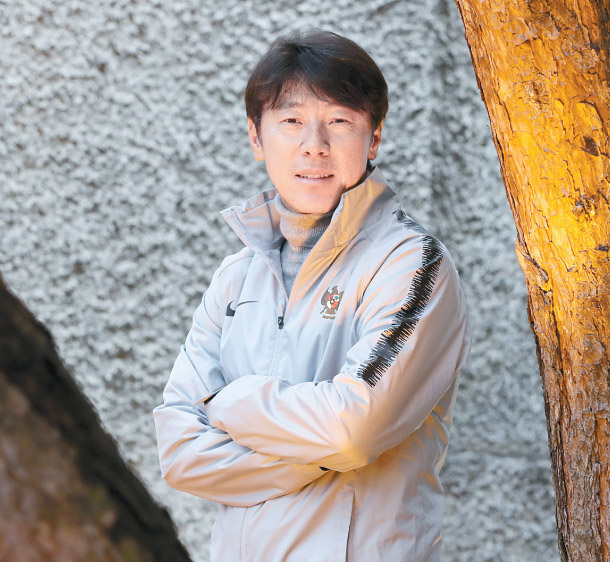 After temporarily managing the Korean national football team, Shin Tae-yong will now settle in Indonesia for the next four years as he will be the head coach of Indonesia’s senior, U-20 and U-23 football teams. [CHOI JEONG-DONG]

After 18 months off from football, former Korean national football team head coach Shin Tae-yong will finally make his return to the pitch, this time, in Indonesia.

Looking at Shin’s coaching career with the national team, he was never given enough time to prove his ability, as he was appointed under urgent circumstances. Due to this, many called him the “firefighter.”

From the start of his coaching career with the national team in 2014 to the 2018 FIFA World Cup in Russia, he’s been that firefighter. Every time the Korean national football team was in trouble, the Korea Football Association (KFA) chose Shin, and in all those situations, he found a way to get somewhat close to the team’s goal.

In 2018, he was appointed head coach of the senior football team when the team had two matches remaining for the final World Cup qualifier. Despite the short preparation, Shin successfully led the team to qualify for the 2018 FIFA World Cup in Russia. Although the team failed to advance to the round of 16, he still achieved an upset by defeating Germany 2-0.

During his coaching career in Korea, he was never given enough time to create his own style or his own team. But after a year and a half, Shin has finally found a place to develop his own team by signing a four-year contract with Indonesia.

Starting on Jan. 5, he will be heading to Indonesia to take up his role as the Indonesia’s head coach for the next four years. During the four years, he will be coaching three different age divisions - senior, U-20 and U-23.

Below are edited excerpts from an Ilgan Sports interview with Shin.

Q. You’ve turned down the big contract offer from China, and instead you chose Indonesia. Did you ever regret your decision?

A. Now that I think about it again, I still think that I made a good decision. I would be lying if I said I didn’t want to take that big offer. Instead of money, I chose time. I needed time more than money. Even if China offered a big contract, I was more attracted to Indonesia, as it guaranteed me the time to perfect the football that I’ve been picturing. I would have to use this time well.

Your contract with Indonesia isn’t as lucrative as the offer you got from China. But are you satisfied with the contract?

I’m satisfied. Financially, Indonesia did its best within its means. More than anything, I was very satisfied with the Football Association of Indonesia’s promise of full support. Even if it affected the Indonesian pro football league, it said it’ll help in every area like player call-up. I was really happy to get this kind of promise, and with this support, it also raised my confidence.

Indonesia has a very different culture from Korea. Are you aware of this?

I’m very well aware. Their Islamic culture, especially, is very different from Korea. I’m going to hire two Indonesian coaches. Back when Uli Stielike was the head coach, I served as the assistant coach. The role of local coaches is important because they know how to unite the players very well. The gap of the culture difference can be narrowed with the help of the coaches.

Since you’re in Indonesia, you’ll have to experience Ramadan. What do you think?

I think I spent an entire day with the football association taking about Ramadan. I can’t not do Ramadan. But [the players] will have to maintain physical strength despite fasting. I think the biggest problem in Indonesian football is their physical strength. They lose strength significantly after the first 65 minutes. They can’t continue their good playing in the second half of the match. I think it’ll be worse during the Ramadan period. They’re probably not getting enough nutrition. We’ll have to find a way to keep their physical strength during this time. There isn’t an answer yet. We’ll find an answer by experiencing it.

Do you think you can adjust to the team well?

One person’s success story is their story of adjustment [to the new environment]. When I was the head coach of Seongnam Ilhwa, we had foreign players. Rather than their ability, it was more important for them to adjust to Korea. I think the biggest reason behind great coaches failing to see success in a foreign country is from failing to adjust. This is my first attempt as head coach in a foreign country. I think what is most important is how fast and how well I adjust.

Indonesia was once considered a top three in Southeast Asia in terms of football, but that’s not the case anymore. Do you think you can bring that back?

One of the reasons for appointing me as the head coach of Indonesia is to restore the country’s football. As I said earlier, physical strength is the biggest problem. As they get weaker physically, they get weaker mentally. Due to this, they lose focus and allow goals. Once they strengthen themselves physically and mentally, we can find hope. Recently, at the Southeast Asian Games, Indonesia lost 0-3 to Vietnam in the final, but they didn’t play that badly. I’ll find other weaknesses aside from the physical strength as I train with them.

Shin Tae-yong’s football is very aggressive and is more offensive than defensive. Will that continue in Indonesia?

You’ve been appointed as the head coach of Indonesia’s three different national teams, the senior, U-20 and U-23. Isn’t that too much work for you?

It’s tight and there is too much work. I have to take care of three different national teams, and the football association asked me to help the U-17 team as well. I chose to do all those. I am busy, but I feel comfortable. The U-23 team failed to qualify onto the AFC U-23 Championship. I think the players in this age division are okay. So I’m trying to make a generation change with the senior national team. My senior team match debut will be a little more refreshing. I plan on spending a lot of time with the U-20 national team.

After it, I’ll be going to a training camp with the U-19 players once again to Germany and the Netherlands. In June, the [senior] team will play its final match of the second round qualifier against Vietnam and play another friendly match. Once these are all done, I think I’ll visit Korea for a break.

I’ve scheduled all these. This tight schedule will allow me to figure out [the players] quicker.

Now that you got appointed as head coach of the Indonesian football team, a lot of the fans have been talking about a matchup against the Vietnam football team, led by head coach Park Hang-seo. What are your thoughts on that?

As I finalized my contract with Indonesia, there had been a lot of stories about head coach Park Hang-seo as well. I am very close with head coach Park Hang-seo, and he’s made great achievements in Vietnam. Back when I coached Seongnam Ilhwa Chunma FC [in the K League], our team picked up a 1-0 win against the Jeonnam Dragons, which was led by Park at the time. I want to have a good competition against Park. He’s probably busy preparing for the AFC U-23 Championship right now. I want him to focus on that and hope his team sees the result it wanted.

Indonesia has set some high expectations for the 2021 U-20 World Cup. As host, they hope to see good results with the young team. How do you feel?

The football association’s president and the [Indonesian] president have big interest in the 2021 FIFA U-20 World Cup. Since the World Cup is hosted [in Indonesia], it makes sense. So they also have big expectations on me. Realistically, looking at the current situation, it’s not easy to even get through the group stage. But I’ll have to change that situation. We have some time from now on. We’ll start with offseason training in January and prepare a lot. We’ll improve our competitiveness. I can also schedule things the way I want, so getting players to join the [national team] won’t be an issue. We’ll be preparing for the tournament with a goal of getting through the group stage.

You are no longer a head coach who gets substituted in an urgent situation. You are now given four years with the Indonesian football team. How do you feel?

As the Korean national football team’s firefighter, I lived an intense life. I abruptly got appointed as head coach of the team for the Olympics and for the U-20 FIFA World Cup, and I got appointed six months before the tournament started. Even for the 2018 World Cup in Russia, I got appointed when there were two final qualifying matches remaining. Since I faced all these situations so suddenly, I wasn’t able to come up with a proper plan. I was just rushing at those times. Although I didn’t have much time, I don’t regret it. I’m thankful that they’ve chosen me as their firefighter. But now, I have four years. This time, I’m going to take one step at a time and be patient. I’ve finalized how to operate the team in my first year. Since I have more time, I feel more confident.

Since the senior national team has lost all five of its matches [in the second round of the Asia qualifier for the FIFA 2022 World Cup in Qatar], I’m not going to care much about the records. But I want to lead the team to a good result at the AFC U-19 Championship in October. I’m not given much pressure regarding our finish at the Suzuki Cup, but since the tournament is receiving quite some attention from Park, I want our team to play well, although we can’t win. At this tournament, I want to challenge myself as to how far our team can advance.