The Miami Marlins have expressed an interest in posted Korean slugger Kim Jae-hwan, an informed source told Yonhap News Agency on Thursday, as the deadline for the player to sign a contract with a major league club is fast approaching. 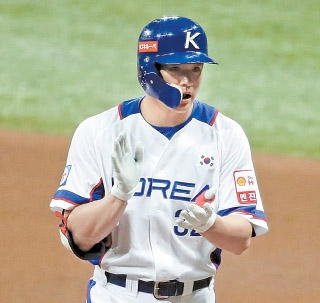 Kim Jae-hwan celebrates hitting an RBI during a 2019 WBSC Premier12 game against Cuba at the Gocheok Sky Dome in western Seoul on Nov. 8. [YONHAP]

According to the source, the Marlins recently asked their Korean contact for a video of Kim in action for the Doosan Bears in the KBO and additional information on the 31-year-old outfielder and designated hitter. The Marlins don’t have a scout in Korea.

Kim was posted for 30 major league clubs on Dec. 5, and he must reach a deal within the 30-day negotiating period, which ends at 5 p.m. Eastern Standard Time on Sunday, or 7 a.m. Monday in Korea. If Kim can’t land a contract by then, he won’t be eligible to be posted again until November.

Kim was posted on the same day as Korean left-hander Kim Kwang-hyun, who signed a two-year deal with the St. Louis Cardinals on Dec. 17. In contrast, Kim Jae-hwan has generated next to no buzz in the market.

But in come the Marlins, who could certainly use any help they can get on offense, after finishing dead last in the National League (NL) in 2019 in runs scored (615), home runs (146) and on-base plus slugging percentage (.673).

The Marlins employ Trey Hillman, former manager of the SK Wyverns in the KBO, as their first base coach. During his two-year tenure in the KBO, Hillman spoke highly of Kim’s power at the plate.

Kim wasn’t originally in line to be posted in 2019, and he was rushed into the market when he gained his eligibility in November. Kim was posted with about 24 hours to spare before the Dec. 5 deadline.

To be eligible for posting, KBO players must complete seven full seasons or their equivalent. One full season equates to 145 days spent on the active roster. Kim, who made his debut in 2008 but only became a full-time player in 2016, had fallen 47 days shy of his seventh full season at the end of 2019.

But Kim received 60 bonus days of service time from the KBO in November, after helping Korea finish in second place at the World Baseball Softball Confederation (WBSC) Premier12 tournament and qualifying for the 2020 Olympics. As soon as he gained his posting eligibility, Kim sat down with the Bears to ask them to post him.

Several major league scouts acknowledged they were caught off guard by Kim’s posting and that they hadn’t put together detailed scouting reports on the player.

Another source, privy to major league transactions, told Yonhap News Agency that some teams have been reluctant to pursue Kim because of his doping history.

Kim tested positive for a banned substance before the Baseball World Cup in 2011 and was suspended for 10 games in the 2012 KBO season. He was still a fringe player then, but ever since he became one of the KBO’s premier sluggers with a breakout 2016 season, the drug cheat label has dogged him.

Kim is also considered a defensive liability in left field. He was drafted as a catcher but switched to first base briefly before converting to outfield full time in 2016.