Questions from the summit

Questions from the summit 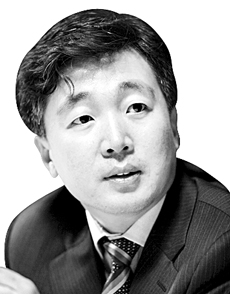 I read the statement following a summit between President Moon Jae-in and Chinese President Xi Jinping on Dec. 23 with unease. My anxiety came from the memory of his last visit to China in December 2017. In an open address before the first summit with his Chinese counterpart, Moon praised Xi’s “democratic leadership.” The accolade of “democratic” leadership can hardly be bestowed upon a ruler who has built emperor-like governance. During a speech at Peking University on the following day, he referred to China as a “high mountain peak” while calling South Korea a “small nation.” He put down national dignity by saying that the highest peak can look imposing when it stands in harmony with other mountains.

His language went beyond modesty yet again. Toward the end of the meeting last month, he said that South Korea and China were “destined as one community.” A destined community itself can have a different meaning in the Chinese context. Xi’s China champions “one community,” where China leads the global order and resurges as the center of the world. It signifies a new order revolving around China. Such a reference should have not been made before Xi. It is unclear whether Moon meant it or made an innocent mistake.

Why he had to mention that Hong Kong and Xinjiang Uyghur autonomous region issues were domestic affairs of China is the biggest mystery. The People’s Daily reported that Moon made such a comment. When Korean reporters inquired, the Blue House explained that Moon only answered that he “understood” when the topics of Hong Kong and autonomous regions came up. Upon criticism in local media, the Blue House said it had asked to correct the misstatement. But the article remains unchanged on the People’s Daily websites. The statement did add that Moon said he “understood” China’s position on internal affairs.

Xi’s response to Moon’s invite to Seoul is also baffling. In a briefing, the Blue House said Xi had answered that he would give serious thought to the idea of visiting South Korea in six years. The invite was not mentioned in the Chinese statement. The Blue House claimed that Xi’s trip to Seoul during the first half of this year is definite and that the two states were discussing the time and scope. Xi demanded a “suitable” resolution to the deployment of the U.S-led Terminal High Altitude Area Defense (Thaad) antimissile system in Korea, whereas Moon did not even challenge Beijing to completely lift a group travel ban and other sanctions on Korean services or products. To avoid further controversy at home, Seoul went too far by making public a diplomatic matter that was still in discussion.

If Xi does come, he is expected to stop by Seoul after making a state visit to Tokyo. Xi has already responded positively when Japanese Prime Minister Shinzo Abe invited him to Japan during cherry blossom season. Seoul is pressing for March since it does not want to be a part of a bundled trip to Japan. Tokyo also protested Xi’s plan to make a double visit. 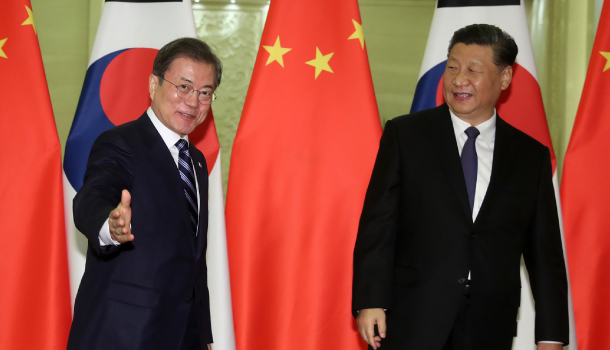 South Korean President Moon Jae-in and Chinese President Xi Jinping move to a meeting room before a summit at the Great Hall of the People in Beijing on Dec. 23, 2019. [JOINT PRESS CORPS]

The government may hope for Xi’s trip before the Apr. 15 general election. If Xi comes to Korea, he may bring the gift of a full lift in travel embargo and others. To fully capitalize on the Chinese effect, Seoul will be bidding strongly for a solo visit. The wishes may not be fulfilled since the political calendar in March is packed due to the National People’s Congress in China. Beijing will likely demand something big in return for making a solo visit to Seoul if it decides to do so.

The public would welcome Xi more if a Chinese leader comes to Korea for the first time in six years in genuineness instead of as a stopover. But political interest should not be involved. If the visit is used for election propaganda, it could end more as a showcase. John F. Kennedy famously said, “Domestic policy can only defeat us; foreign policy can kill us.” But the saying could fall on deaf ears of those who think defeat in election means death.