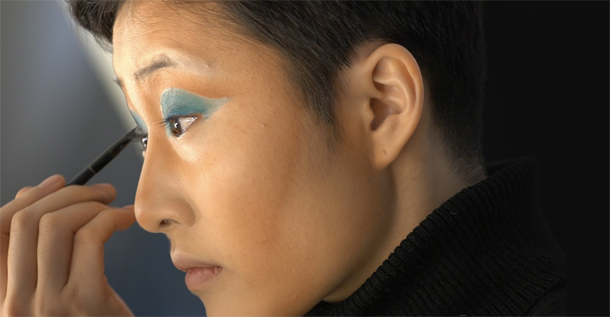 Drag performers have recently began to make public appearances in Korea, mainly in the music videos and live performances of a handful of K-pop acts. While the extravagant looks and bold acts of drag queens add a touch of novelty to the bright lights of K-pop, it’s safe to say that drag performers still remain unfamiliar to most Koreans. And even more unfamiliar are drag kings: female drag performers who portray male characters.

The history of drag culture is not a particularly long one, and its origins can be traced back to the 1930s and 1940s in the western world, even though the term drag had been used much earlier in the theater community. In Korea, drag culture really began to take hold only about five years ago. The first Korean drag artist to gain international appeal was the drag queen named Kimchi, who made it to the top 3 on the American drag competition show, “RuPaul’s Drag Race” in 2016. Many credit her with igniting the drag scene in Korea.

Last year, girl group AOA performed Mamamoo’s “Egotistic” on the Mnet music show “Queendom” in September along with drag queens while the members of the group wore black men’s suits. In October, Brown Eyed Girls released “Wonder Woman,” a remake of singer Cho Won-sun’s 2003 hit. The music video featured the four members of the group wearing suits and drag queens in white wedding dresses. The two events caught the attention of many at a time when gender awareness in the country is higher than it ever has been.

Yet even within the world of drag in Korea, drag kings remain a small part of a scene dominated by male performers and male audiences. Still, there are drag kings actively performing and making their voices heard. One leading figure is Azangman, a female drag performer who made her debut in 2017.

“I think society doesn’t make it easy for female performers in the first place,” she said. “At drag shows, you have to show within a very short amount of time the things that you have inside of you and the thoughts you have - which often involves stripping and dancing. But people ask the women, upon hearing those things, ‘Are you a stripper?’ or at least misunderstand our actions in similar ways.”

Working as an office worker at a trade company by day and turning herself into Azangman at night, she is not afraid to show her act to the world. In a recent interview with the Korea JoongAng Daily, the woman behind Azangman talked about her queer identity, her drag life and being a woman in a male-dominated subculture. The following are edited excerpts from the interview.

Q. When did you start your career as a drag performer?

A. It goes back to when I was studying art history in Britain. I was actually a person who wanted to be included in society and even felt proud by following the rules. But being in the art world, I learned my position in the world. I had achieved no particular success in the field, I was not Caucasian, not male, not heterosexual, and not cisgendered. So when I was working on my project, people would always come back to me being an Asian woman - being an Asian, Korean female queer - when they were tracing the basis of my thoughts. I got tired of the fine arts. I got depressed.

But the way I tried to alleviate that depression was so unhealthy, because I would get so drunk and start taking my clothes off at clubs. My partner back then told me that if I liked dancing and stripping so much, then I should try making a career out of it. I actually thought that was a good idea. There was a chance for me to try out to be a female drag performer - a drag king. So through that, I made my debut in 2017, and it’s led me to here and now.

What does your name Azangman mean?

It comes from my very bad habit of belittling myself as a woman, because women are taught to do so from a young age. Azang comes from the Korean mimetic word ajang-ajang, which is the way babies wobble when they walk. It was a way of me saying that I will wobble the best I can, and I hope you enjoy my shows. Honestly, I didn’t think it through much and there are moments when I’m even embarrassed about the name. But it’s easy to remember, and I’ll take it with me.

When you came back from Britain, did you feel that the Korean society was much more conservative and closed off than the western world?

No. Korea is very open - openly discriminatory and openly hateful. The people are very open about their prejudices, and they’re even proud of it. They’re very open to sex, but not to gender. It’s like every living being here is prone to discrimination. There’s not one person who doesn’t get discriminated against, and people are so open about it.

Are there things that you have heard from people that are openly discriminatory?

There are so much that it’s pointless to say. But one that’s stuck in my head is “You look so normal. Just live like normal person.” What is “normal?” Society has been set in a way that it is only good for those in the higher classes to [survive] - the “normal” people. So that comment telling me that I look “normal,” well it’s a compliment I guess (laughs). I hear and see so many hateful things about me, a woman and a lesbian. Things like this comment don’t even count as vicious.

I’ve been exposing myself through a lot of interviews, and most of the comments seem to point out the fact that I’m not in a desperate situation - and that I’m complaining when I have so much. But honestly, how appalling does my situation have to be for me to talk about discrimination? Is that the only way that people will let you talk about it?

What do you focus on showing in your shows?

I want to show people that with my female body, I’m making an effort for liberation. And breaking the gender dichotomy to myself, I want to show images of men or people that terrified me, or experiences that brought me down. By becoming them and acting them out, I felt like I could overcome those things. What I do is aimed at changing the way people think. Most of the times, people just think the way they’re taught to. By seeing new things that happen on the stage, they’re shocked - but that changes them.

When do you feel limited on stage by the fact that you are a female drag performer?

I often expose my nipples on stage, as a part of the movement to free women’s bodies and stop the limitations of women’s bodies. But many clubs where I perform don’t let me take off my top even though male drag performers portraying women are allowed to. They are playing the social character of a female, but the social rules of men are applied to them and they were free to roam in both territories, whereas I was still restricted as a female body.

I was told that I shouldn’t show myself in the same way and that it would be dangerous. Women are always forced to censor themselves. We’re told that it’s dangerous and that I could put myself in a dangerous situation. But putting a limitation on me on the pretense of safety is just justifying the current situation. Anyway, the clubs now let me do what I want because I’ve been taking my top off for so long (laughs).

Do you feel that people are changing?

I wouldn’t say that I feel the change. But there are more people that are beginning to see eye to eye. There are moments that bring me down, too. There are limits to what an individual can change. But just by exposing myself and reminding the world that I’m here - queer, lesbian and feminist - that stops them from taking us out of the picture as a whole.