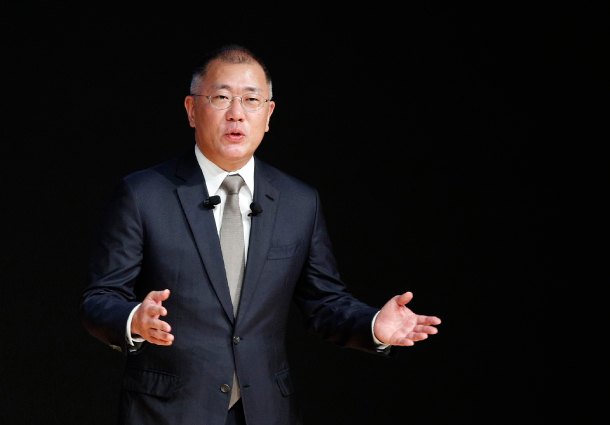 Hyundai Motor Group is investing more than 100 trillion won ($86.4 billion) in the next five years to become a force in the future mobility market.

After pledging in 2018 to transform itself from an automobile manufacturer into a mobility services provider, Hyundai Motor Group plans to launch eco-friendly vehicles, commercialize an autonomous driving platform and introduce new mobility services to the world by 2025.

By announcing the largest investment ever under the leadership of Hyundai Motor Executive Vice Chairman Euisun Chung, son and heir apparent of Hyundai Motor Group Chairman Chung Mong-koo, the group is hoping to engineer a turnaround in the stagnating global automobile market, in which virtually all global automakers are seeing sales decline.

“Due to advances in technology and networks, the imaginary future is becoming a reality, and change is picking up pace in the automobile industry,” said Chung in a New Year’s speech to employees Thursday at the group’s headquarters in southern Seoul.

“In response, Hyundai Motor Group wants 2020 to be the starting year for our initiative to secure leadership of the market of the future.”

Within the 100-trillion-won investment, Chung said Hyundai Motor Group will focus on technological innovation in the eco-friendly vehicle market.

The largest automaker group by sales in Korea is planning to launch a total of 44 electric vehicles, 11 of them purely electric, by 2025.

Within this year, its two automakers, Hyundai Motor and Kia Motors, will offer hybrid and plug-in hybrid versions of the Sorento, Tucson and Santa Fe SUV models. By 2024, the group plans to commercialize a new electric car architecture for its vehicles.

Since Chung became the de facto leader, the group has been looking for a turnaround as car sales declined.

Also under the new initiative, Chung said the group will stay at the forefront of autonomous driving by launching Level 4 and 5 self-driving cars before competitors. It wants to develop its own self-driving software platform in 2022, run tests in 2023 and officially commercialize the technology in the second half of 2024.

“For the quickly expanding mobility area, we will establish branches in major areas like the United States, Europe and Asia, launch businesses starting this year and expand them step by step,” Chung said.

In September, Hyundai Motor Group announced it will invest $2 billion to establish a joint venture with Dublin-headquartered Aptiv to develop autonomous driving software.

According to Allied Market Research, the global autonomous vehicle market is projected to grow from $54.2 billion in 2019 to more than $550 billion by 2026.

Also in the speech, Chung vowed to expand partnerships with other companies to increase the group’s foothold in new mobility services like ride-hailing and car-sharing services

Hyundai Motor Group is introducing a new ride-hailing service in India. It is already in the electric car-based ride-hailing service market in Southeast Asia in collaboration with Grab. The group supplied 200 Kona electric SUVs for the service’s launch in Singapore and is expanding it to other countries in the area starting this year.

Chung added that the group is investing in developing flying cars and related infrastructure.

In October, Hyundai Motor Group started an urban air mobility (UAM) division and hired Shin Jai-won, a veteran of the U.S. National Aeronautics and Space Administration, to head it.

According to Morgan Stanley, the global UAM market is expected to grow to $1.5 trillion by 2040. The Hyundai group believes that flying cars can be an effective solution to traffic issues in megacities.

As the 100-trillion-won investment is geared to new business areas, some analysts worry about conflict between the group and its employees making fossil-fuel-based vehicles.

“The 100-trillion-won investment is certainly a good start, but it’s only a start; there are a lot more things that need to be done moving forward,” said Kim Pil-soo, an automotive engineering professor at Daelim University. “But making electric cars and focusing on mobility services means that some employment cuts could be made, which could lead to another set of disputes with the union.”

Kim said such changes in direction are expected to result in a 40 percent cut in personnel costs in the coming years, which Hyundai Motor and Kia unions could resist.

“Thankfully, many workers at Hyundai Motor and Kia Motors plants are near the retirement age, so the process might be smooth,” Kim said, adding that a new moderate labor union chief at Hyundai Motor could also be a plus.

Others are concerned that the new investment could threaten Hyundai Motor Group’s financial health, as the group is already committed to an expensive plan to build new headquarters.

In September 2014, Hyundai Motor Group bought the former headquarters of state-run Korea Electric Power Corporation in Samseong-dong, southern Seoul, for 10.5 trillion won and announced a plan to develop a car industry hub and a new 105-story headquarters on the 7.9-hectare (19.5-acre) site.

“The investment is large, but it is a durable and safe amount for the group to handle, as the funds could be collected without trouble from our affiliates,” Hyundai Motor Group spokesperson Kim Tae-sik said over the phone.

“The new headquarters isn’t just an investment by us. There is a whole consortium behind the project, and different parties are making their own investments, so the burden is not too big for us.”