New Year’s events at Korea’s chaebol are typically formalities as chiefs deliver speeches to employees at ceremony halls and grandiose visions are announced.

Younger executives at Samsung and LG broke with tradition this year, heading to a research center and making a video message instead.

Samsung Electronics Vice Chairman Lee Jae-yong’s first official appearance for 2020 was at the semiconductor research center in Hwaseong, Gyeonggi, where he was updated on the company’s 3-nanometer chip technology and discussed future chip strategies with the division’s chief executives.

“Past performance does not ensure future success,” he told Samsung staff. “We need to abolish wrong practices and thinking in order to open up a new future.”

He also echoed the vow to become a “100-year company,” which first appeared in his speech at Samsung’s 50th anniversary in November. “We should always keep in mind that sharing and developing hand in hand with our neighbors and society is our task in becoming a 100-year company.”

For decades Samsung was known for growth as its priorities, but since last year, the company has been placing an emphasis on social contribution and sustainability.

Lee’s choice of the chip research and development unit as his first field visit of the year also signals Samsung’s priority in developing system chips as the company’s future growth engine. If Samsung electronics develops a 3-nanometer chip, it would be a world first.

The company is still the world leader in memory chips, TVs and smartphones but had a sluggish 2019 in terms of profits due to a crash in memory chip prices. 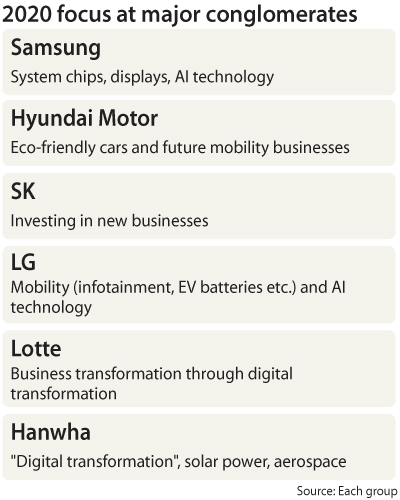 Semiconductors account for one-third of Samsung’s operating profits. With the high dependence on memory chips having proved risky last year, the next growth engine remains the key question.

LG Group CEO Koo Kwang-mo stressed the importance of putting customers first and urged LG employees to immediately start moving on their insights. This is Koo’s second New Year’s message since he took on the position in June 2018. Koo had suggested that LG’s management keyword should be “customers” back then, but this year’s message was more about sharing advice on how LG staff could act on that value.

For that message, the video for Koo’s New Year’s message was arranged in a Q&A form. It was also delivered through phones and TV screens instead of at an official ceremony where company staff and top executives get together on their first day of work. This was the first time LG Group did not hold the usual event.

“Everything has to start from the customer’s pain points (…) for which we actively make use of using digital technology to do so with speed,” he said. “We shouldn’t spend time on defining why something wouldn’t be possible but always be prepared to act for one single reason. Execution is also a must. We should always think and act from the customer’s perspective.”

“Last year, we bore fruit from investment into new growth sectors such as biopharmaceuticals, materials and renewable energy,” said Jang Dong-hyun, CEO of SK Holdings in a statement.

“We will continue to make progress in those sectors to meet market expectations,” he said.

SK Chairman Chey Tae-won refrained from issuing any statement nor did he make a public speech at the New Year’s event.

He only participated in the ceremony and held casual talks with SK employees, those involved in funding social start-ups and an owner of a restaurant near the headquarters of the group.

Hanwha Group Chairman Kim Seung-youn ordered a full-fledged digital transformation across its subsidiaries in a New Year’s ceremony held at a Seoul hotel.

“Digital technology is changing everything about business management. We have to be determined to make 2020 the starting year of the group’s digital innovation,” said Kim.

“We will start applying technology from fields that Hanwha is currently strong at and can be good at in the future, going on to implement digital transformation in all of our business sectors.”

The chairman also emphasized sustainability as a core keyword. Hanwha will expand its Malaysia plant this year to boost production of solar power cells and modules.

Retail and energy-focused GS Group pledged to bolster digitalization and the deployment of big data across affiliates.

“Combining IT and data, we need to lead digital transformation,” said Huh Tae-soo, who took over the group in December.

In attaining the goal, Huh said that recruiting employees is critical.

“Competition will be intensified in our target market,” the chairman said in a statement.

Steelmaker Posco said that the era of more future-centric mobility and the global transition toward sustainable development offer new opportunities.