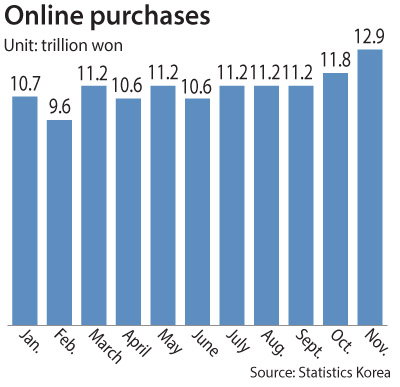 Online shopping hit record levels in November, as monthly sales broke 12 trillion won ($10.4 billion) for the first time ever as shoppers moved away from real-world stores and toward internet platforms.

According to Statistics Korea on Thursday, online shopping in November reached 12.8 trillion won, up 20 percent compared to the same period a year earlier.

At the current rate, purchases for full-year 2019 are expected to break 130 million won and achieve a new annual record.

Since the first smartphone landed with the arrival of the iPhone in 2009, online shopping has been growing rapidly. While in the past it was limited to younger people, more older consumers are shifting toward online shopping due to its convenience and price competitiveness. Online retail is now threatening conventional retail.

Online shopping now accounts for 30.4 percent of retail purchases. As of November, it stood at 30.4 percent, 4 percentage points higher the 26 percent a year earlier.

The statistics agency said that the continued growth in food delivery services was the main contributor to the rise in online shopping in November.

Online food service purchases doubled compared to the previous year in November to 1 trillion won, the first time it exceeded that key level.

“The way people consume has changed thanks to the diversification of food services, the growing preference for home meal replacement products and the development in delivery services,” said a Statistics Korea official.

The growing number of single-person households is contributing to the rapid expansion of online food service purchases. Actual purchases of food and beverages online, which is a separate category from food delivery services, increased 26.5 percent year-on-year to 1.5 trillion won.

Other noticeable online purchases were cosmetics, which grew at 32 percent year-on-year to nearly 1.2 trillion won as major discount events were held at home and abroad, including Korea Sales Festa during the first 22 days of November, Black Friday and Cyber Monday. The increase in the number of Chinese tourists also contributed to the rise in sales.

Mobile shopping was up 28.1 percent year-on-year to 8.4 trillion won. Mobile shopping now accounts for 65.9 percent of online purchases, which is 4 percentage points higher than the previous year.

Rapidly growing online and mobile shopping are changing the landscape of the traditional retail industry, with major players such as Lotte and Shinsegae ramping up their own online services to fight losses.

According to a recent government report, major discount mart revenue only grew 0.8 percent in November. The situation is even worse for neighborhood supermarkets. Their revenue dropped 3.3 percent year-on-year, indicating that consumers are no longer visiting these offline shopping venues.

Lotte plans to merge all of its online services that are operating separately into a single online platform.