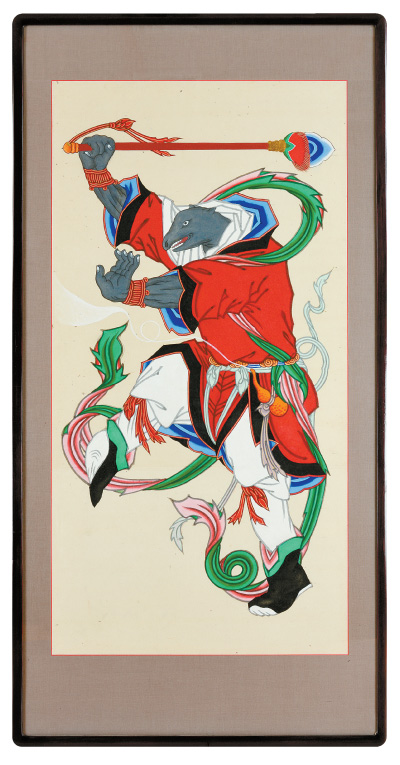 A painting of a rat by artist Lee Chi-ho portrays the rat as a guardian, in accordance with the belief that zodiac animals were spiritual guards. [NATIONAL FOLK MUSEUM OF KOREA]

With a pointy nose that can smell food from miles away, they can survive electricity shocks and breed in temperatures as low as negative 70 degrees Fahrenheit. They once almost wiped out the human race entirely, and ultimately, they’re looking to call your home their own.

It is now the Year of the Rat - and while that may be good news for some, others aren’t so sure how they feel about the rodents.

When rats make headlines these days, it’s rarely for something good - unless if you’re talking about Krispy Kreme’s recent decision to sell mouse-shaped donuts or Sam Rowley’s award-winning photo of mice brawling inside a tube station in London - but an exhibition at the National Folk Museum of Korea says otherwise.

“Even a Rat has Its Day,” an exhibition dedicated to the Year of the Rat, opened at the museum in central Seoul on Christmas Eve. It will be open on the first floor of the museum until March 1.

“People’s perceptions of mice and rats have changed over the ages,” said Yoon Sung-yong, director-general of the museum located on the grounds of Gyeongbok Palace. “It’s no surprise that rats were considered disgusting and unsanitary.

“But there was also a time when the people thought mice and rats were wise animals that carry good luck,” he said. “And to a point, they have done some good for mankind, by pitching in to advancements in medical research.”

The exhibit is designed to invite visitors to walk through and witness some of the changes in perception and understanding Korean people had about rats and mice, from the Three Kingdoms of Korea (57 B.C. to A.D. 668) to more recent years. 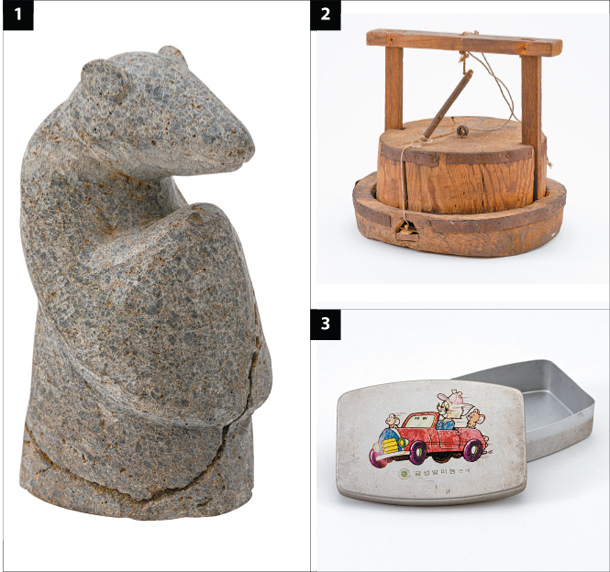 1. A stone statue of a rat dating back to the Unified Silla period (668-935). 2. A rat trap used in Korea during the 20th century 3. A lunch box with an illustration of characters from the American cartoon series “Tom and Jerry.” [NATIONAL FOLK MUSEUM OF KOREA]

“The stone statue in the shape of a rat, made of agalmatolite […] excavated from Gyeongju, [North Gyeongsang,] confirms that the Unified Silla used the popular culture of the 12 zodiac animals,” the museum wrote in its explanation note for the statue.

Paintings from this age tend to portray rats as half-animal and half-human beings that can protect people from harm, in agreement with local beliefs that saw the 12 zodiac animals as types of guardians. The exhibition also showcases examples of talisman carried by people that used the traditional Chinese character for rats.

“If you look through ‘Samguk Yusa’ [a book about the legends and history of ancient Korea’s Three Kingdoms], you see how the people at the time characterized mice and rats,” said Kim Jong-dae, professor of folklore at Chung-Ang University in southern Seoul, in a lecture he hosted at the museum on Dec. 24. “In the stories told in the book, mice and rats often take a role as a figure with wisdom and foresight.”

A similar image of rats is portrayed in some old sayings of Korea.

“Sayings such as ‘Like the rat eats salt,’ or ‘Like the rat carries salt’ mean that a person is diligent and persistent as the rat nibbles steadily on very little amounts [of food],” reads a page out of the book “Old Sayings about Rats in Proverbs of Joseon” (1922) showcased in the exhibition.

Other publications on folk stories exhibited, such as “Folktales about Rats in Grand Collection of Korean Oral Tradition” (1983) and “Story of a Rat in Joseon Singayupyeon, Songs of Gods Passed Down in Joseon Period” (1930), also share stories of rats and mice as animals with wisdom.

“Rats were portrayed as smart and assiduous beings in our folk stories,” said Noh Eun-hee, an official at the museum. “But this image starts to change as rats become a nuisance for farmers. The exhibition is designed so that as the visitors walk through it, they are also walking through the changing times and images of the rat.”

Paintings of rats gnawing at fruits and plants, as well as some relics from the Joseon Dynasty (1392-1910) that have been ruined by rats are included in this section of the exhibition.

The change in perception of rats becomes especially visible to visitors as they walk under a large hole in the ceiling from which a rather ominous horde of rat figures stare down.

“That’s how we lived back then,” said Kim Jin-ho, a man in his 50s who was visiting the museum with his children on Dec. 30. “You’d hear the pitter patter of the feet of the rats as they ran this way and that way in the ceiling of the house.”

This is something that younger Koreans have less experience with.

“We have been holding these exhibitions dedicated to the 12 zodiac animals every year for the past 20-plus years,” Noh said. “So this is not the first exhibition on rats. The story we tell about how people perceived the rats in ancient times has not changed much. But as years progress, there are some changes on how the younger generation sees rats and mice.”

The exhibition highlights this gap by playing clips of interviews it conducted with people in their 40s and 50s about their experiences with rats, and placing next to the monitor examples of rat poisons and mousetraps used in their time.

On the other side of the section, the museum plays interviews with children aged younger than 10 while screening next to it an episode from “Tom and Jerry.”

The exhibition ends with a visible timeline of events that took place in the Year of the Rat in modern Korean history, which includes the 1636 Qing invasion of Joseon, the Japan-Korea Treaty of 1876, Sohn Kee-chung’s wining gold in the marathon at the 1936 Berlin Olympics, the first constitutional election held in Korea in 1948, the official launch of Seoul’s subway line No. 2 in 1984 and the retirement of Seo Taiji and Boys, one of the earliest K-pop groups, in 1996.

Some of the public figures and artists who were born during the year of the rat are Momo, Jeongyeon and Sana from girl group Twice, Joy from Red Velvet, Kim Chan-mi of AOA, rappers Yumdda, Deepflow and Simon Dominic and singer Seo Taiji; popular entertainers Yoo Jae-suk and Kim Won-hee; as well as more veteran actors turning 60 this year including Lee Mi-sook and entertainer Lee Kyung-kyu.