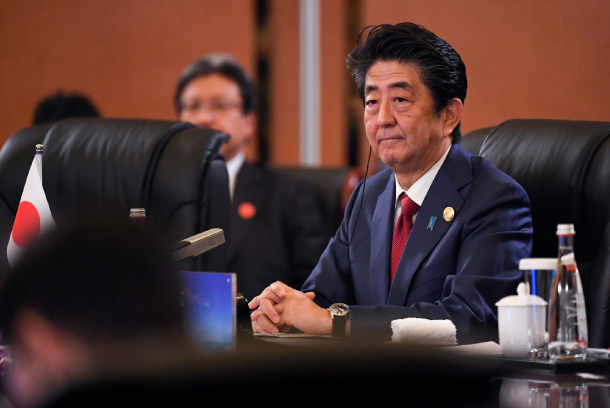 Japanese Prime Minister Shinzo Abe said that he would like to meet with Korean President Moon Jae-in “more frequently and discuss more positive issues,” in a New Year’s Day interview, though he did not budge in his demand that Korea keep its diplomatic promises.

Abe sat for an interview with TV Asahi on Dec. 26 that aired on Wednesday.

“Because we are neighbors, there are times that our interests collide,” said Abe, adding that he stressed to Moon in China last month that “civilians’ exchanges must continue,” and that Moon agreed.

Moon and Abe held a 45-minute meeting on Dec. 24, their first bilateral summit in 15 months, though they held a brief informal meeting in early November on the sidelines of an Asean meeting in Bangkok. Their bilateral talks took place on the sidelines of a trilateral summit with Chinese Premier Li Keqiang in Chengdu, capital of Sichuan Province. While the two leaders made little progress in resolving their disputes over Japan’s export restrictions and the forced labor compensation issue, the bilateral summit was seen as a step in the right direction.

When asked to describe what kind of person Moon is, Abe called him a “gentleman with very gentle manners” and said he would like to “resolve pending issues so that there could be a situation where the two countries’ leaders could meet more frequently and discuss various, more positive issues.”

However, for this to happen, Abe said that “promises between countries have to be kept.” He said he looked forward to the “Korean side taking clear measures.”

The Blue House said after the Dec. 24 summit that Moon asked Abe to restore export regulations to their state prior to July 1, 2019, and “make a definite decision” on this matter. The two sides also confirmed their differences on the forced labor issue but agreed on the need to resolve the matter through dialogue.

Abe appears to maintain the position that the Korean government should resolve the forced labor issue first.

When asked about his view on Korean National Assembly Speaker Moon Hee-sang’s proposed bill to resolve the forced labor compensation issue through creating a foundation funded by voluntary contributions from the two countries’ companies and members of the public, Abe replied, “I look forward to Korea as a country to create an opportunity for sound bilateral relations.”

But he said that the two sides were on the same page about issues being resolved “through dialogue” and also shared the understanding that the more problems there are, the more discussions are needed.

He said that Korea-Japan relations, as neighboring countries, were important, especially in regard to the North Korea situation, stressing trilateral cooperation with Washington.

In a meeting with senior aides on Monday, Moon stressed that Japan’s unwarranted export restrictions could have been very problematic but became a “blessing in disguise” thanks to the support of the public. That message was reiterated in Moon’s speech at the Korea Chamber of Commerce and Industry in Seoul Thursday.