Ahn Cheol-soo says he is back

Ahn Cheol-soo says he is back 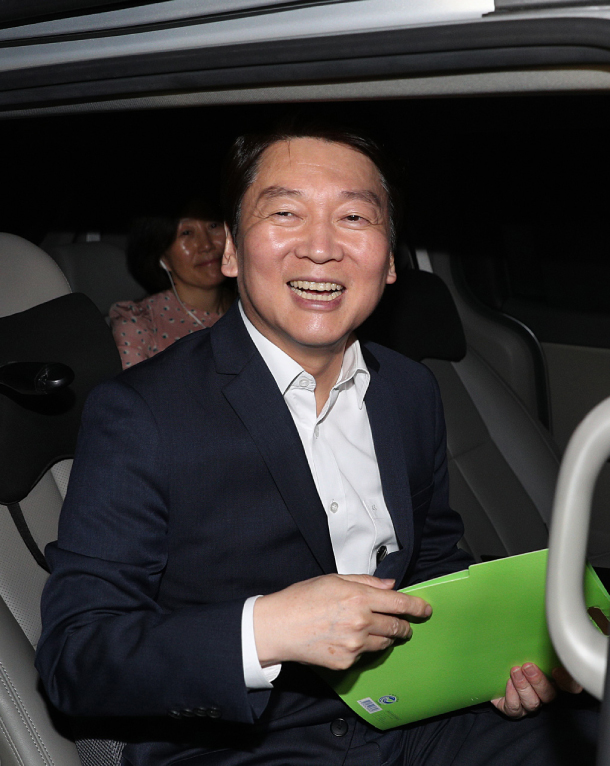 Ahn Cheol-soo, a co-founder of the Bareunmirae Party, said Thursday he will end a self-imposed exile and return to politics.

“It is time to return and consult with you how I should change politics and how the country can advance to the future,” Ahn wrote in a message posted on his Facebook account. “Even if it will be a lonely path, I will walk on it, cherishing the people’s hearts.”

Ahn said the politics of Korea have worsened since he first entered them eight years ago. “I have deeply thought about if it is right to start politics again,” he said. “The people had summoned me to the path of politics and guided me. Now, I want to advance toward the future with the people.”

He said his initial belief remains unchanged that “politics is a service for the country’s future.”

Ahn, a doctor-turned-software-mogul-turned-academic, entered politics in 2011 with delirious support from young people. He set his sights on such top positions as Seoul mayor and president of Korea. He ran in the 2012 presidential election but ended up withdrawing, and then in the 2017 race, finishing in third place. After a humiliating defeat in the Seoul mayoral election of June 2018, Ahn left politics the next month. Later that year, he left to study in Germany. In October last year, he went to the United States and stayed as a visiting scholar at Stanford University.

The Bareunmirae Party, which Ahn co-founded in 2018, has been experiencing factional strife since his departure. Ahn made a decision to return to politics with about 100 days left before an April 15 general election.

An aide to Ahn told the JoongAng Ilbo on Thursday that Ahn currently has no plan to meet with Liberty Korea Party (LKP) Chairman Hwang Kyo-ahn or former Bareunmirae head Yoo Seong-min to discuss a conservative merger. He said Ahn will likely form his own political group for the upcoming election.

“Ahn will likely come back to Korea before the Lunar New Year holidays start on Jan. 24,” he said. “Because preparations for the election are urgent, lawmakers loyal to Ahn want him to return as soon as possible.”

Observers said Ahn will likely create a new party with lawmakers still loyal to him. Another possibility would be returning to the Bareunmirae Party and gaining control over it. Yoo, another co-founder of the party, already abandoned it and started his own party. Bareunmirae Chairman Sohn Hak-kyu said Thursday that he welcomes Ahn’s return. “I want to accommodate Ahn’s demands as much as possible,” he said.

Ahn created the People’s Party, a predecessor of the Bareunmirae Party, in 2016 and won 38 seats in the general election later that year, becoming the third largest political group. At the time, Ahn said voters were fed up with the ways of the two largest parties and the time had come for an alternative.