Hwang is making a name for himself in Salzburg

Hwang is making a name for himself in Salzburg 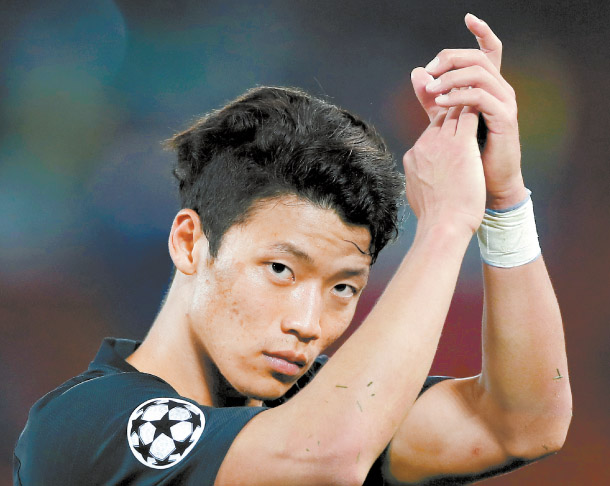 For Hwang Hee-chan of Red Bull Salzburg, 2019 was an unforgettable year.

Although Son Heung-min of Tottenham Hotspur got the headlines for being the best Korean footballer in the European league, Hwang made headlines in Korea throughout the second half of the year for his improvement and great achievements in the 2019-20 season.

During UEFA Champions League group match against defending champion Liverpool on Oct. 3, 2019, Hwang made headlines as he outsmarted Liverpool’s defender Virgil van Dijk, the 2019 UEFA Men’s Player of the Year.

After a successful first half of the season, Hwang is finally back in Korea for a short break but still, his head is filled with football.

“I had physical therapy in the morning and did some weight training in the afternoon,” Hwang said. “Even if I tell myself to take a break, after a short while, I just can’t.”

Hwang started his youth career with the Pohang Steelers, but rather than continuing his senior career at the club, he joined Salzburg in 2014. Having played in no matches for Salzburg during the 2014-15 season, Hwang joined FC Liefering on a loan for two seasons, from 2014-15 to 2015-16.

With Hamburger SV, Hwang had one of his worst seasons, scoring only two goals in 21 matches. This time, he’s playing a significant role for Salzburg.

Quite a number of big clubs in Europe now send their scouts to analyze Hwang.

“Thanks to [Salzburg’s] head coach and my teammates, I got to play well,” Hwang said. “If I work hard in Korea during offseason, I believe that I’ll achieve more improvement in my skills. I’m in my mid-20s now. I’ll play a fun sort of football that will satisfy me and the fans. As a forward, I’ll continue to earn offense point.”

Looking at Hwang’s performance in the first half of the season, he’s made great improvement on his rough play, which was considered his weakness. His own aggressive breakthrough and activity on pitch are the same but he added more detail to his playing style. By doing so, he’s become a completely different player from the 2018-19 season, where he scored only two goals while playing for Hamburger SV.

“When I heard that [my play] is rough, my pride was hurt,” Hwang said. “But rather than stopping there, I tried to improve on my weaknesses.”

To do so, he once visited freestyle football artist Jeon Kwon to focus on improving his skills like shots and control. Also, by watching clips of his role model Luis Suarez, he’s been analyzing Suarez’s dynamic movement and scoring abilities. Hwang’s has also been analyzing Neymar’s creative playing style and is trying to learn their strengths.

As it’s already been five years since Hwang joined Salzburg, he’s trying to find a new club. Once again, his performance in the first half of the season has given him more options in terms to clubs as clubs in England, Germany and Italy have shown interest in him.

“All the players dream of playing in the big league and for a big club,” Hwang said. “But the most important thing is to hear that I’m a good player, whichever team I play for. I have to play well without injuries.”

Although there have been a lot of clubs showing interest in Hwang, it is all up to Salzburg.

“Since I’m a forward, I can’t be careless about my statistics,” Hwang said. “I am very greedy. But rather than setting my goal as how many goals I want to score, or how many assists I want, I’ll set my goal as focusing on my team winning. Then, I’ll have my chances. From now on, I’ll consider all this time as time for me to prepare for the final qualifier and to compete at the 2020 Qatar World Cup.”