Is democracy beginning to fall?

Is democracy beginning to fall? 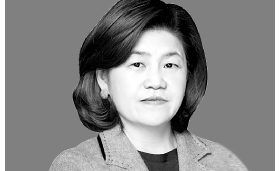 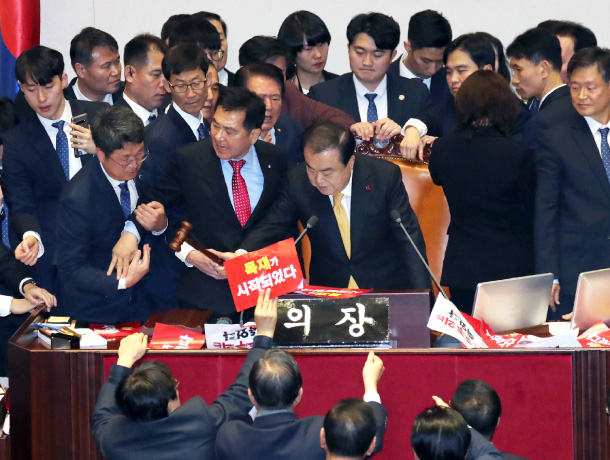 Assembly Speaker Moon Hee-sang, center, bangs the gavel to announce that the National Assembly had approved the election revision bill on Dec. 27. [YONHAP]

Lee Jeong-min
The author is an editorial writer of the JoongAng Ilbo.

The fall of democracy today happens at the polls, according to Harvard University professors Steven Levitsky and Daniel Ziblatt in “How Democracies Die.” In the book, they dig into the paradox of polls and dictatorship. The two argue that dictatorship after the end of the Cold War comes from elected leaders, not at gunpoint. Contemporary dictatorship is created by bribing the referees by dominating the judiciary, making the main players of the other team unable to play or creating an unlevel playing field by changing the rules of the game to disable the opposition party.

Watching the three bills passed in the National Assembly at the end of the year, I took the book out again. The unprecedented event of passing the budget bill, election bill and the bill for an agency to investigate high-level officials by mobilizing opposition parties is a warning signal that Korea’s democracy is headed towards a crisis.

The bill to create an agency to investigate high-level officials is a pinnacle of judiciary domination. President Moon Jae-in reorganized the judiciary by replacing the supreme court justices and constitutional court justices with pro-government figures, such as members of the Korean Law Research Society, and will dominate the appointments for the controversial public official investigative agency. The president can appoint the “referees” in the Supreme Court, the Constitutional Court, the prosecutors’ office and the agency investigating public officials. Including items not in the original draft of the bill to establish the agency to investigate public officials and practically preventing it from investigating the living power is close to criminal activity.

Now the objective of reforming prosecutors serving as servants of power is over. But the former justice minister said he was so happy he teared up, and Seoul Mayor Park Won-soon said his heart was bursting. I wonder if they are the same people who lamented the tragedy and misfortune of referees losing control and turning into a tool to oppress political enemies.

The fall of Venezuela was because of the dictatorship of Maduro after Chavez. They were democratic leaders elected with absolute support, not by guns. After coming into power, Chavez became a dictator by punishing judges for being “deep-rooted evils,” disabling the high court and creating a secondary judiciary agency named the judicial emergency commission. “Bribed referees” became a faithful dog to oppress the parliament and media with decisions that pleased the power. President Erdogan of Turkey became a “Sultan” by arresting hundreds of judges, prosecutors, constitutional court judges and reporters and revising the constitution limiting presidential authority.

Surprisingly, the United States is not an exception when it comes to the temptation of bribing the judge. President Franklin Roosevelt, who became a national hero after the Great Depression and World War II, attempted to reorganize the Supreme Court to expand the number of justices when the Supreme Court opposed the New Deal as a leftist policy. Using the fact that the Constitution does not define the number of chief justices, he attempted to break the nine-member tradition and fill the judiciary with his supporters. If the Congress did not scrap the plan, he may not be remembered as the greatest president of the 20th century.

Let’s go back to the book. The authors concluded that democracy is not protected by the completeness of the constitution and laws but by systematic control to carefully use legal authority and mutual tolerance acknowledging the other side as a rival qualified to govern. They claimed that democracy is accepting the opposition as a negotiation partner, not a target to bring down.

How about Korea? The ruling power has been denouncing and passing the opposition as the deep-rooted evils and made the rules of the game in the secret room excluding the opposition. The election law is in tatters as a result of “intolerance” to prevent the Liberty Korea Party from becoming the biggest party at any cost. In an unlevel playing field, proper play cannot be conducted. The problem is that when fair play falls, democracy falls as well.

The first President of the United States, George Washington, is praised for having laid the foundation of the American presidency from the risk of leading to another monarchy, and he practiced mutual tolerance and systematic control. After two terms, he became a civilian, and during his eight years in office, he was vetoed twice by the Congress. He said that he signed many bills out of respect to the legislature even if they were very different from his opinion.

A new year is here, after the National Assembly became a mess that President Moon called “unsightly.” At the beginning of 2020, President Moon’s first action was to approve the appointment of Justice Minister Choo Mi-ae. Twenty-three ministerial positions have been appointed without the National Assembly’s confirmation in 30 months. I may be ill-informed, but all I can think of is that President Moon said he heard a myth that those who were attacked in confirmation hearings performed better.