At port, Moon encourages exports in 2020

At port, Moon encourages exports in 2020 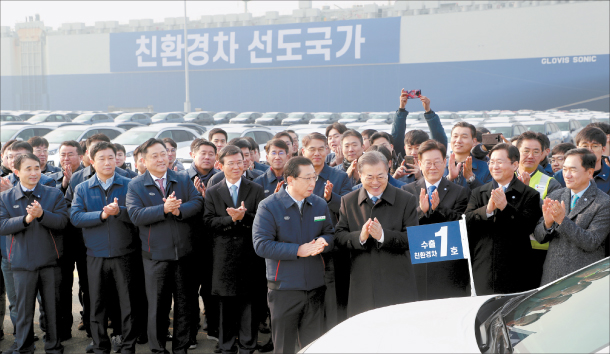 President Moon Jae-in, center, looks at a Kia Motors Niro, which was the first electric vehicle to be exported this year at the Pyeongtaek-Dangjin Port in Gyeonggi on Friday. [JOINT PRESS CORPS]

“A new decade for Korea to become one of the world’s top four exporters in 2030 has dawned,” Moon said on a visit to the Pyeongtaek-Dangjin Port in Gyeonggi. “We are the world’s first country to mass produce hydrogen-fueled vehicles and have the greatest year-on-year increase in environment-friendly vehicles in the world,” he added.

“The global economy and trade conditions will improve compared to last year,” Moon said. “We have seen that possibility in December.”

Korea’s export in 2019 overall saw a double-digit drop, the first in a decade. The government said exports dropped 10.3 percent compared to a year earlier. The last time exports fell in the double-digits was in 2009, when they dropped 13.9 percent.

But the decline dropped into the single digits — 5.2 percent compared to a year earlier — for the first time in seven months in December.

“The government will focus on turning the export indexes to positive growth while further speeding up innovative growth,” Moon vowed.

The president said the government will expand into new markets through the Regional Comprehensive Economic Partnership (RCEP), which is a multilateral FTA among economies in the Asia-Pacific region, as well as through bilateral FTA with countries in Central and South America.

“We will further increase small- and medium-sized enterprise (SME) exports through the establishment of the Brand K expansion strategy and quadrupling export finance for SMEs,” Moon said.

The Blue House said in a statement that Moon’s visit to the Pyeongtaek-Dangjin Port was meant to demonstrate the government’s desire to push exports and look for new growth engines for exports such as environment-friendly vehicles.

Moon in response emphasized the government’s support for new growth engines in export.

“We will increase the number of high value-added exports by focusing on three new industries: system semiconductors, vehicles of the future and 5G connectivity-related industries,” Moon said.

The government has set this year’s growth target at 2.4 percent, higher than Bank of Korea’s forecast of 2.3 percent.