IBK’s new CEO is turned away by union

IBK’s new CEO is turned away by union 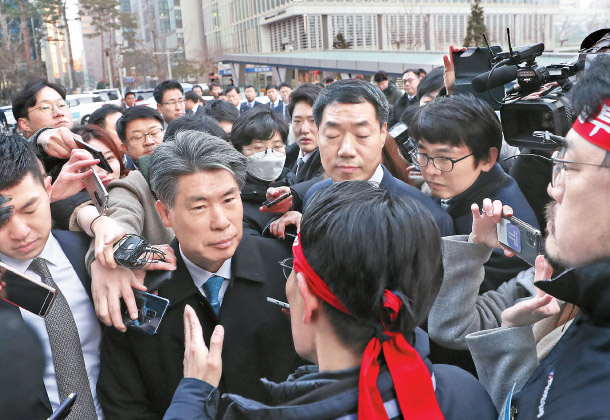 Yoon Jong-won, new head of the state-run Industrial Bank of Korea (IBK), attempts to enter the IBK headquarters in central Seoul on Friday but gets blocked by the bank’s union workers. [YONHAP]

Yoon Jong-won, former senior secretary for the economy in the Moon Jae-in administration, was appointed as the new head of the state-run Industrial Bank of Korea (IBK) Thursday, breaking the financier’s 10-year practice of filling the position internally.

The lender’s union is strongly opposed to the move, arguing that Yoon’s appointment is nothing more than a top-down decision from the Blue House.

IBK’s chief executive is appointed by the Blue House with a recommendation from the finance minister.

“[Yoon has] abundant experience in management of the finance industry as well as bank restructuring, monetary policy, regulations and global negotiations,” said the bank in a statement on Thursday.

The 59-year-old Yoon is a long-time bureaucrat, having worked for years at the Ministry of Economy and Finance as well as global organizations, such as the Organisation for Economic Cooperation and Development (OECD) and IMF.

His three-year term was scheduled to start Friday. Yoon was unable to work on his first day as some 50 members of financial industry-associated labor unions blocked him from entering the building.

“It is ridiculous that the same administration is sending someone from the Blue House,” he added.

Yoon had to make a U-turn at the footstep of the bank’s headquarters in Jung District, central Seoul, Friday.

Moon’s Democratic Party is known to disapprove of the appointment of bureaucrats to financial entities once he or she leaves government employment.

In 2013, during the Park Geun-hye administration, the party harshly slammed Hur Kyung-wook, a former vice minister of finance, when he emerged as a candidate for the head of IBK. Hur was not ultimately employed by the bank.

“Involvement of government in finance is cancer and toxic. There is no good in appointing a former official from the Finance Ministry to the bank when there are qualified candidates from inside,” the party had said in a statement.

The party’s stance seems to have shifted with the change of the administration. It has been silent regarding Yoon’s appointment.

“We don’t exactly know about the appointment process,” said an official from the Blue House on Friday. “But we are aware that those who have worked at the Blue House are well aware of the administration’s philosophy in state affairs.”

The labor union’s protest of Yoon’s appointment is likely to continue.

The bank’s union said Friday that it will continue to stage strikes until Yoon’s appointment is withdrawn or he resigns on his own.