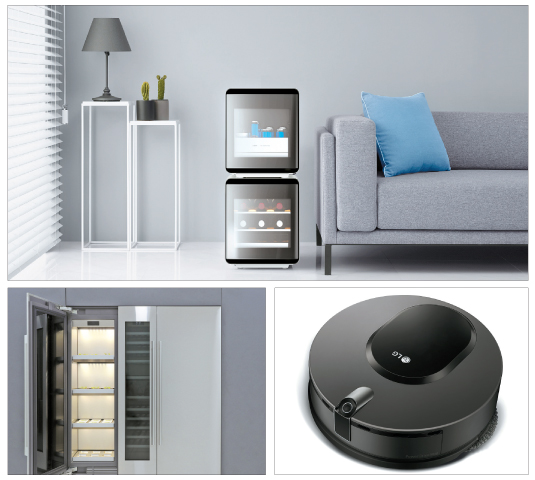 Clockwise: Samsung Electronics’ mini fridges in the form of cubes, robotic floor cleaner by LG Electronics and Samsung’s AirDresser, all to be displayed during CES held next week in Las Vegas. [SAMSUNG ELECTRONICS, LG ELECTRONICS]

If 8K televisions are not enough, Samsung Electronics has more arrows in its quiver for CES, which starts on Monday.

At the consumer electronics trade show, the Korean electronics company will be unveiling three types of cube-shaped mini fridges. Each has a different target product. One is for beer, another is for wine and the third is for skincare products.

Being cubes, the cube fridges can be used as stand-alone products, or they can be stacked.

Samsung will also be featuring its footwear refreshers at the CES.

The footwear refreshers use technologies similar to those used in the company’s AirDresser, a clothes management appliance.

The device has steam and air functions that clean and deodorize.

Samsung Electronics said that the footwear refresher is intended to meet an demand from those caring for their shoes on a daily basis.

“There are a number of consumers who pay as much attention to footwear items as they do to clothing,” the company said in a statement.

“It will be kept in optimal condition when a consumer just puts their shoes in the refresher,” it said, “Users can simply dry their shoes after going out on rainy or snowy days.”

The two new product lines - the cube fridges and the shoe refresher - will hit the market in the first half of the year.

These product categories appear to be under development to challenge domestic rival LG Electronics, which is seen to be leading the trend in the home appliance market with a set of fresh products: the Styler clothes steamer and the Tromm clothes dryers.

Kim Hyun-suk, head of consumer electronics at Samsung Electronics, said on Friday that the future machines and appliances will be tailored for user lifestyles and tastes.

“In the new era, technology that suits each person’s tastes will take center stage,” he said in a statement released on the company’s website.

The president is scheduled to deliver a speech on Jan. 6 during the CES trade show in Las Vegas.