It’s never too late to learn ― and win a contest

It’s never too late to learn ― and win a contest 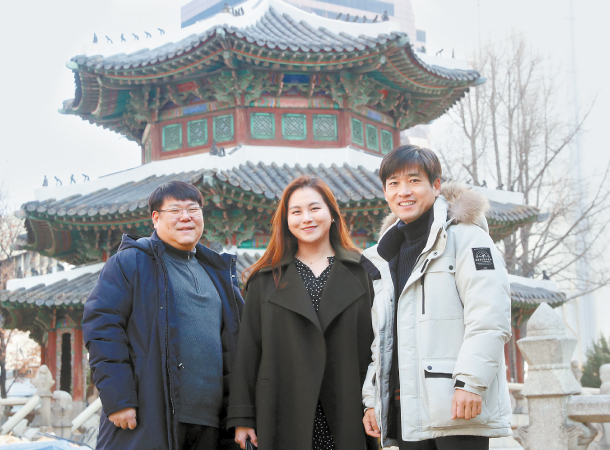 The three students from Hanyang Cyber University, who won second place in the 2019 Korea Institute of BIM Competition, pose for a photo in front of Hwanggungu, the only remaining building of Hwangudan, Korea’s equivalent to China’s Temple of Heaven, in central Seoul. From left: Kim Jae-jun, 50; Cho Yu-jin, 34; Kim Bu-han, 48, leader of the team. [KANG JUNG-HYUN]

Three students who returned to the classroom after several decades recently won second place in the 2019 Korea Institute of BIM Competition.

The three — 48-year-old Kim Bu-han, 34-year-old Cho Yu-jin, and 50-year-old Kim Jae-jun — have careers and full-time jobs. But following their personal passions, they enrolled in the department of digital architecture and urban engineering of Hanyang Cyber University in eastern Seoul to take classes to earn another bachelor’s degree.

BIM is an acronym for “Building Information Modeling,” digital representations of physical and functional characteristics of a facility created through computer graphics. Through BIM, we can use virtual reality (VR) technology to experience designs in the blueprint phase of a building yet to be constructed.

It can also be used to experience buildings that already exist — or that existed in the past.

In the event hosted by the Korean Institute of Building Information Modeling, the team came up with the idea of applying BIM to existing cultural properties in Korea.

Among countless cultural properties to chose from, the team chose Hwanggungu, a three-storied octagonal building in Seoul where memorial tablets of the gods were kept — the only remaining building of Hwangudan, Korea’s equivalent to China’s Temple of Heaven.
Hwangudan was a three-story altar built in 1897 when King Gojong (1852-1919) of the Joseon Dynasty (1392-1910) proclaimed the Korean Empire. It was destroyed in 1914 by the Japanese colonial government and only one of its buildings, Hwanggungu, remains.

“The government starts to repair a building only when it became very old and is about to break down,” said Cho Yu-jin, an architect. “If we build up data for materials and design methods of our cultural properties, we won’t have to go through a lot of work later.”

The team’s project had seven steps. First, they successfully scanned the inside of Hwanggungu with cooperation from the Seoul Metropolitan Government. They used 3-D laser scanning from technology company Trimble.

The team scanned the monument’s blueprint, which included specific measurements of every part of the building, and used that data to create a 3-D colored model of Hanggungu.

“Since I had to work during the days and study at night for the class, I spent my weekends on this project,” said Kim Jae-jun, also an architect. “I can barely remember how the last three months have passed.”

The three also attended lectures related to BIM every Saturday.

As a result of their hard work, when officials need any information about Hwanggungu, they can simply access the report the three created.

“Although I started studying architecture late, I will try to strengthen my own competitiveness through diverse projects related to BIM,” said Kim Bu-han, who works for a digital information company. “I will continue pursuing my interest in managing cultural properties with high technology as well.”