Yoo breaks away from Bareunmirae with 7 others

Yoo breaks away from Bareunmirae with 7 others 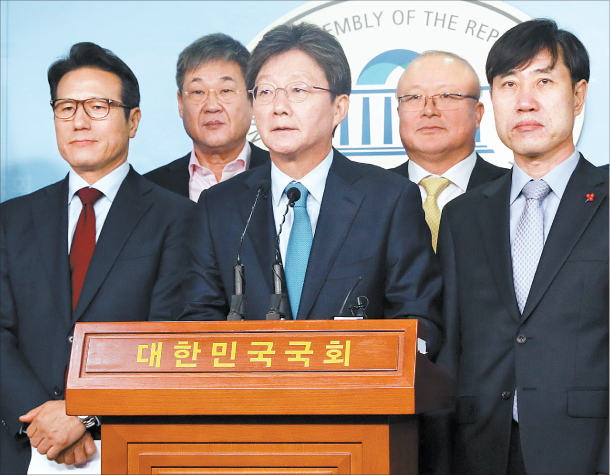 Rep. Yoo Seong-min, center, and seven other lawmakers hold a press conference at the National Assembly on Friday to announce their leaving of the Bareunmirae Party to form a new conservative political party ahead of the April 15 general election. [NEWS1]

Rep. Yoo Seong-min and seven other lawmakers abandoned the Bareunmirae Party on Friday to form a new conservative political party ahead of the April 15 general election.

“Today, we are leaving the Bareunmirae Party,” Rep. Yoo said in a press conference Friday morning.

“Although there are only a few of us and our powers are not strong, we will rebuild the conservative from square one,” Yoo said. “We will be new conservatives who will check and replace the Moon Jae-in administration, which destroyed our country with its incompetence, high-handedness, corruption and illegality.”

“We created the Bareunmirae Party two years ago with a promise that reformist conservatives and pragmatic centrists would work together to serve the future of this country,” Yoo said. “But the party failed to win the people’s support.”

The Bareunmirae Party suffered a crushing defeat in 2018 local elections, winning none of the 17 main metropolitan mayor and provincial governor races. After Ahn finished the Seoul mayoral race in third place, both Yoo and Ahn retired from the leadership to take responsibility.

The party’s popularity plummeted further, and it has been suffering from a serious factional strife under current Chairman Sohn Hak-kyu.

The Bareunmirae Party had 28 lawmakers in the legislature as of Friday, but its presence will be reduced to 20, the bare minimum to keep its position as a negotiation bloc. In addition to Yoo, Reps. Choung Byoung-gug, Lee Hye-hoon, Oh Shin-hwan, Yu Eui-dong, Ha Tae-keung, Jeong Woon-chun and Ji Sang-wuk abandoned their memberships.

The Bareunmirae Party, still the third largest power in the legislature after the ruling Democratic Party (DP) and the main opposition LKP, may break up further as Ahn declared Thursday that he will return to politics. Ahn’s loyalists remaining in the party may defect to form a new party with him.

Although Yoo said he will launch a new party on Sunday, he is destined to face a possible conservative merger ahead of the general election. After the press conference, Yoo told reporters that he welcomes Ahn’s political comeback.

“Two years ago, we made a promise to the people that reformist conservatives and pragmatic centrists will work together,” Yoo said. “I wonder if Ahn still agrees with it.”

Yoo also said he texted Ahn late last year to work together again, but did not receive a response.

Yoo said he will ask lawmakers in the Ahn faction to join his political initiative. “I have told every one of them to join me to form a new conservative party, and I will continue to do so,” Yoo said. “Some may join, some may not, but I told them we should work together someday.”

It also remains to be seen if Yoo’s new political group would join the largest conservative opposition party. LKP Chairman Hwang Kyo-ahn said Wednesday that he will speed up a conservative merger.

In November, Yoo made clear that a grand merger of conservative parties will only be possible if the LKP admits the legitimacy of President Park Geun-hye’s removal from office.