For Paik Seung-ho of SV Darmstadt 98, 2019 was an unforgettable year.

“I built my confidence last year, so in the new year, I’ll be running on the ground, nonstop,” Paik said. 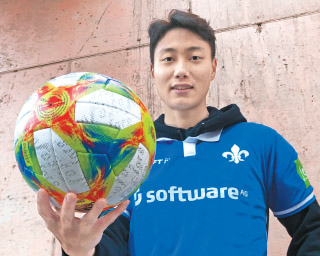 Paik Seung-ho of SV Darmstadt 98 hopes to compete at the 2020 Olympics. [PIH JU-YOUNG]

Looking at Paik 2019, he achieved his longtime goal of making his senior national football team debut.

In June, during Korea’s friendly match against Iran, Paik made an impressive international debut as the defensive midfielder. With his stable ball control and play on the pitch, the fans have applauded him and were excited that he could become the next Ki Sung-yueng of Newcastle.

Although Ki is continuing his professional career in the English Premier League, he announced his retirement from the Korean national football team in early 2019. Since his retirement, Team Korea had been struggling with his absence.

But with Paik’s impressive debut, he caught the eyes of Korea’s U-23 head coach, Kim Hak-bum. In November, Paik also joined the Olympic team, led by Kim. One match was enough for Paik to earn Kim’s trust on the pitch.

“My New Year’s wish is to compete at the Tokyo Olympics,” Paik said. “If I can play, we’ll challenge ourselves to win a medal.”

Competing at the Olympics has been a dream of Paik’s since he started football. Unlike the World Cup, the Olympics has an age limit of 23. Due to this, players only tend to get one shot in their career to compete, as the Olympics is a quadrennial event.

“I’ve been friends with [Jeong] Tae-wook [of Daegu FC] and [Lee] Sang-min [of Ulsan Hyundai FC] since I was little,” Paik said. “We’ve promised each other to play together at the Olympics. If it happens, it’ll be an honor.”

To get to the Olympics, Korea’s U-23 team will first have to qualify. Unfortunately, Paik will not be able to join his friends and the U-23 squad in this stage, as the Korea Football Association (KFA) failed to get approval from his club. As the Asian Football Confederation (AFC) U-23 Championship isn’t on the FIFA match calendar, the clubs don’t have to release their players to the national team.

Of the Korean football players currently playing in the European league, only Jeong Woo-yeong of SC Freiburg joined Kim’s squad, and starting Wednesday to Jan. 26, the young Taeguk Warriors will compete at the AFC U-23 Championship in Thailand to earn their spot in the 2020 Tokyo Olympics.

To earn their spot at the Olympics, Korea will have to finish in the top 3 at this tournament. Since Japan already qualified as host, if Japan reaches the semifinals, then the three other teams in the semifinals will be given spots in the Olympics without having to play the third-fourth place match.

Korea will play its first group match against China on Jan. 9, starting at 10:15 p.m. Korea is assigned in Group C with Uzbekistan, China and Iran.

“I can’t be with them, but I’ll be cheering for the team,” Paik said. “I’m sure they’ll fulfill my absence.”

Even if Paik doesn’t get to compete at the Olympics, for Paik, this year will be meaningful, as it’s his 10th year in Europe. In July 2010, Paik joined FC Barcelona’s youth team, when he was 13.

In August last year, he made a big decision to leave Spain and start a new career in Germany. Including an FA Cup match, Paik got to compete in all 14 matches for Darmstadt so far in the 2019-20 season.

“The biggest difference in German football from Spanish football is that they have quick transition from offense to defense and run a lot,” Paik said. “I was really worried at first. But I was able to adjust [to the club] earlier than I thought because the head coach and my teammates reached out to me. I consider this as a reward for my hard work over the 10 years.”

To meet the expectations of fans and the club, Paik only thinks about football. When he’s not training, he rests at home, but whenever he has time, he studies football by watching clips of Toni Kroos of Real Madrid, his role model. When he has questions, Paik tends to reach out to Koo Ja-cheol of Al-Gharafa SC and Lee Chung-yong of Vfl Bochum, as they’ve played football in Germany for almost 10 years.

“When I first joined Darmstadt, during training, I made a sharp pass, and my teammates applauded and shouted ‘schon,’” Paik said. “In German, this word means beautiful or pretty, so when I first heard it, I wondered why they would say pretty to a man. But once I found out, it also meant cool and magnificent. At the Olympics or at Bundesliga, or whenever I’m on the ground, I want to hear ‘schon.’”