Twin sisters Lee Jae-yeong and Lee Da-yeong are back on the same court to do their part to help the Korean women’s volleyball team qualify for the 2020 Tokyo Olympics. 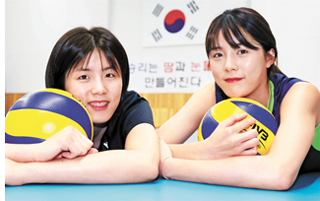 Twin sisters Lee Jae-yeong, left, and Lee Da-yeong hope to help the Korean women’s volleyball team earn its spot in the 2020 Tokyo Olympics by winning the Asian qualifier, which runs from Jan. 7 to 12 in Thailand. [ILGAN SPORTS]

Led by captain Kim Yeon-koung, the Korean women’s volleyball team left for Thailand on Sunday to compete at the Asian qualifier, which will be held from Jan. 7 to 12 in Nakhon Ratchasima, Thailand.

The Korean men’s volleyball team left for China on Sunday for its Asian qualifier, which also runs from Jan. 7 to 12.

The tournament is their last chance to qualify for the Olympics. Although the twin sisters played together for Team Korea during the 2018 Asian Games, this is the first time that the two are playing in an Olympic qualifier.

While Korea competed in the intercontinental qualifier in August, Lee Da-yeong wasn’t able to join the team due to an Achilles injury.

“I finally get to compete in an Olympic qualifier with Jae-yeong,” Lee Da-yeong said. “I’m excited.”

Born on Oct. 15, 1996, Lee Jae-yeong is a few minutes older than Da-yeong. Their mother was a setter and competed in the 1988 Seoul Olympics, so volleyball was always around them. They started playing the sport when they were 9 years old and joined the Korean Volleyball Federation (KOVO) in 2014.

In their sixth season in the KOVO, they both became dominant players in the league. Jae-yeong is an outside hitter for the Incheon Heungkuk Life Pink Spiders while Lee Da-yeong is a setter for Suwon Hyundai Engineering & Construction Hillstate.

This season, Jae-yeong is ranked third in scoring, at 364 points, and attack success rate, at 40.25, and is ranked fourth in receive percentage. Lee Dae-yeong is ranked first in the league for assists, averaging 11.41 per game in the 2019-20 season.

Despite the strong start to the season, they don’t feel satisfied yet, as there’s a bigger event coming up this year: the Olympics. Although Korea hasn’t yet qualified for the 2020 Tokyo Olympics, to compete at the Games has always been something that the twin sisters have dreamed of.

Having already qualified, Japan and China won’t compete in the upcoming qualifier. The seven teams competing will be divided into two groups: Thailand, Chinese Taipei and Australia in Group A and Korea, Kazakhstan, Iran and Indonesia in Group B.

“Thailand had been preparing [for this event] with the national team for a long time,” said Lee Jae-yeong. “We won’t be careless.”

Looking at the world rankings, Korea, ranked ninth, should have a leg up over Thailand, who is ranked 14th. Korea is also ahead in their all-time head-to-head record against Thailand, but looking at the two teams’ matches since 2016, Korea is definitely behind. In the last 10 matches they’ve played against each other, Korea only has three wins, while Thailand has seven.

At this tournament, setter Lee Da-yeong’s role is quite important as she’ll have to face Thailand’s veteran setter Nootsara Tomkom. She’s a world famous setter who has played in leagues in Spain, Switzerland and Turkey.

“Da-yeong will be the player who has to play the best on our team,” Jae-yeong said. “Our offense will be more active if she sets the ball quickly.”

In addition to being skilled at set placement, Da-yeong’s height, 1.80 meters (5 feet 11 inches), gives her a major advantage, and she has excelled at blocking this season especially. During a match against the Hwaseong IBK Altos on Nov. 3, 2019, she scored 10 points. It was the first time in KOVO women’s league history that a setter scored double-digit points in a single match. Of the 10 point she scored, four were from blocks.

“[For blocking,] I’ve got the height,” said Da-yeong. “As a setter, I try to match the tempo and speed of the hitters. Since all of our players are good, we’ll earn our spot in the Olympics.”