Killing the self-employed to save the part-timers

Killing the self-employed to save the part-timers

Left, a noraebang karaoke has “For rent” posted on its door, while a restaurant owner in Jongno District works in the kitchen alone on Dec. 27, right. Restaurant owners are saying the higher minimum wage has been affecting their businesses. [LIM SUNG-BIN]

Tae Young-ja, 60, has been selling pork cutlet for 13 years in Jongno, central Seoul. She thought her business had its ups and downs, but now seems like the worst. There were once three workers in the kitchen. This year, all the employees are gone, and Tae is only left with her husband in the business. On Dec. 27, she was asked when the business started to decline.

“It started two years ago,” she said, about the time when the minimum wage started rising so quickly.

Part-time working hours had to be reduced. This did not have a lasting effect, so she had to use her husband instead.

Her husband, who was once clumsy, is now good at frying the cutlet skillfully. He displayed his burnt forearm as a badge of his hard work.

“This is a country I have never experienced before as a businessman,” Tae said.

Interviewed at the end of 2018, a karaoke bar owner surnamed Kim said: “The burden of labor costs cannot help me from working alone at night, and have part-time workers after 11 p.m.” 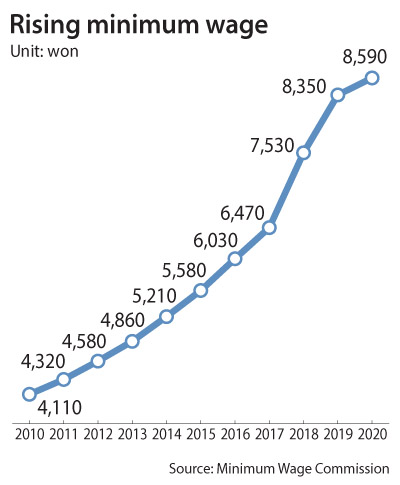 I tried to talk to the bar owner on Dec. 30. But the door was closed tight and plastered with lease notices. The floor was covered with leaflets. The building manager said Kim left six months ago, and he has not found a new tenant yet.

The JoongAng Ilbo visited 30 shops in Myeong-dong and Jongno in downtown Seoul between Dec. 26 and 30, before this year’s minimum wage of 8,590 won per hour was applied. Although the minimum wage was increased at a slower rate this year compared to the double-digit increases in each of the last two years, it is up 2.9 percent compared to 2019.

Among the stores that were visited, 18 places, or 60 percent, were unaware that the minimum wage is rising to 8,590 won this year. This means they may face the shock of the increase.

A proprietor surnamed Hwang, 48, says the minimum wage increased so much last year that even if the increase is small this year, it will be hard to tell. Two part-timer workers were sent away last year, but now the wage is higher again.

The minimum wage is having an impact in various ways: 27 shops (90 percent) said “the increase is a burden.”

Shin In-chul, 69, who runs a rib restaurant in Myeong-dong said, “The raise cannot force the employee who has worked for 40 years to quit.”

The most serious problem is that the owners cannot afford the minimum wage.

Two of the 30 shops covered a year ago have been closed.

“From 2018, two part timers are gone and now only my wife and three workers are left. Our second floor with 30 tables is closed, and only the first floor with seven tables is left. Now we are facing our limit,” said a ramen restaurant owner in Myeong-dong.

A man surnamed Lee, who has run his business in Myeong-dong for 35 years, said he is seeing an increase in stores looking for tenants.

“I have not seen such a thing even during the foreign exchange crisis. If the best commercial district in Korea is like this, the other places will be worse. It is doubtful whether the minimum wage needs to be raised even in times of recession,” Lee said.

“My whole body aches after working 14 hours a day without a day off. It is hard to find another job after running the convenience store for 19 years,” said Kim Chul-geun, who runs a convenience store in Jongno.

Worse than the rent

Some store owners say the minimum wage is more a burden than rent.

Eleven out of 30 said so, and nine said the opposite. Unlike fixed costs like rent, the minimum wage is a variable cost, which is critically affecting the self-employed.

“Who does not know the rent is not expensive? I can quit if the rent seems expensive. The labor costs, however, are money that goes out against my will,” said a hair salon owner surnamed Jeong.

Some point out the ignorance of the increases. A bakery owner surnamed Choi says “raising 240 won of the labor cost also raises the material costs.”

A man surnamed Choi, who runs a PC room in Myeong-dong, says “jobs with a harsh environment such as Korean barbecue restaurant or karaoke rooms require higher wages than the minimum wage, which is basically killing the self-employed to save the part-timers.”