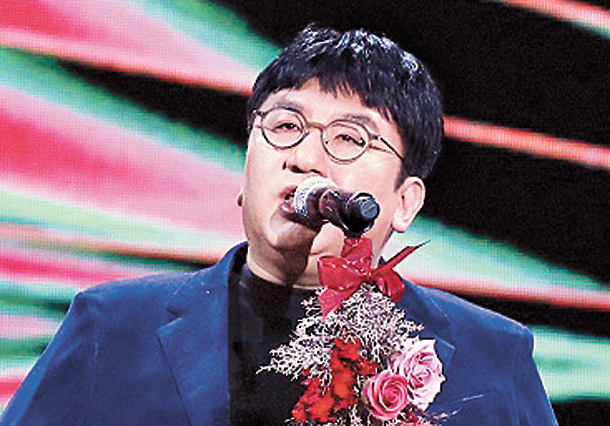 CEO Bang Si-hyuk of Big Hit Entertainment vowed to focus on improving the K-pop music industry environment upon receiving an award for Best Digital Song on behalf of boy band BTS and also the Best Producer Award for himself Saturday on the first day of the 34th Golden Disc Awards held at the Gocheok Sky Dome, western Seoul.

“It’s so meaningful to be given such awards because this year marks the 15th year for Big Hit Entertainment,” said Bang.

“In retrospect, so many things happened in 2019. It was a year when the quality of music and content of Korea got to be recognized on the international stage.”

Bang added that it was a “sad and regretful year with unfortunate news,” referring to the suicides of two young female celebrities - singers Sulli and Koo Ha-ra - and the latest online chart-rigging sajaegi scandal.

Citing his will to make a better musical environment for everyone involved, CEO Bang also urged everyone else to join in on his effort.

“I hope to see everyone - not only those working in the music industry, but the fans who love music, the media and the press - make an effort to make a place where the artists are respected as human beings. People should be respected as they are,” Bang said.

The 34th Golden Disc Awards, sponsored by TikTok and broadcast by JTBC, honored 10 teams on Saturday for the songs released between Oct. 31 2018 to Oct. 31 this year. Nine acts other than BTS were honored for their songs, including indie band Jannabi, girl groups ITZY and Twice, solo singers Chungha, Jennie and Taeyeon.

The second day of the award honored music albums, also released during the same time period.