It’s not just tech companies jumping on the artificial intelligence (AI) bandwagon. Retail is all over the go-to technology of 2020 as well.

Lotte Shopping on Sunday said it is jumping on the trend, introducing an AI speaker with a display. 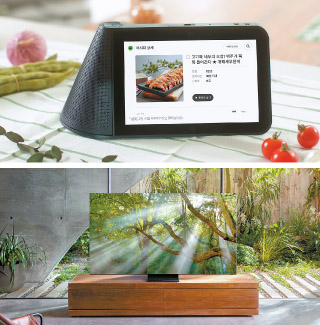 Similar devices are already available in the market, but Lotte says it is the first device in Korea that supports voice commands with a touch screen function.

The service is still in its beta testing phase, and no timeline has been given for a mass-rollout-ready version.

Lotte will seep the product into the market, focusing first on the V.I.P.s. Its goal is not to sell the device but to get the device out there so people do more shopping.

“Our goal is to spread our content on other AI devices,” said a spokesperson for Lotte Shopping.

According to Singapore-based market analyst firm Canalys, the number of AI speaker shipments worldwide is estimated to have hit 207.9 million last year, an 82.4 percent jump on year. The report showed that AI speakers with a touch screen are gaining a presence in the market, with on-year sales having spiked 500 percent, to 6.3 million, in the third quarter last year.

Samsung Electronics on Saturday said it will introduce a QLED 8K television with improved AI features at CES, set to start Tuesday in Las Vegas.

Powered by an AI quantum processor, the television has a built-in AI ScaleNet technology, which Samsung claims will offer a higher quality picture by allowing 8K streaming on networks with lower bandwidth capabilities. AI ScaleNet utilizes deep learning to minimize data loss during compression and will be applied on the videos featured on Amazon Prime Video, according to Samsung.

The AI processor works with audio capabilities. Object Tracking Sound Plus technology is able to provide a more vivid audio experience. The technology recognizes a moving object in the video content and delivers the sound accordingly.

Element AI was co-founded by its CEO Jean-Francois Gagne and Yoshua Bengio, a computer scientist noted for his work on artificial neural networks and deep learning.

The two firms inked a partnership in Las Vegas on Saturday.

Under the partnership, they will develop diverse AI technologies that can be used in various electronics devices and services.

“AI needs a clear direction to deliver higher value to consumers,” said the company’s Chief Technology Officer Park Il-pyung. “[LG] will lead the systematic development of AI through its partnership with Element AI.”