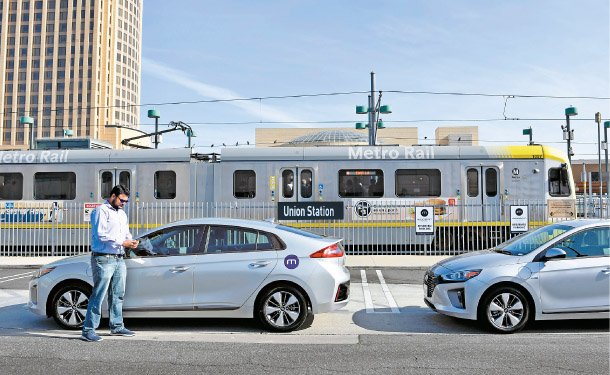 LOS ANGELES - Los Angeles was ranked top for having the worst traffic congestion in the United States last year. According to the Texas A&M Transportation Institute’s 2019 Urban Mobility Report, its drivers spend an average of 119 hours each year in traffic delays. And it’s in this city that Korean carmaker Hyundai Motor is testing its very first mobility service - car sharing.

Since last November, the company has been offering 15 of its Ioniq plug-in hybrid electric vehicle (EV) sedans for the Mocean Carshare. It is run by Moceanlab, a new company, based in Los Angeles. Users can unlock the door with a mobile app instead of a physical key. The vehicles can be borrowed for up to 72 hours and have to be delivered back to their original position, which Hyundai designated at the city’s four main train stations, including Union Station. Visitors entering the city on public transportation are main targets for now.

“There are many forms of car sharing, but the format we’re testing at the moment is called ‘station-based.’ Our next planned expansion is to start the ‘free floating’ model, which allows people to drop off the cars in public parking lots,” Jung Hun-taek, Hyundai’s vice president of the mobility business group, told reporters at a press event in Los Angeles on Saturday.

The free floating service will start in March. Los Angeles currently has more than 10 car-sharing service providers, all by far larger than the offering from Hyundai Motor, but none offers free-floating drop-offs. The company’s 2020 goal is to bring 300 EVs into service by the end of the year, which Hyundai sees as the sufficient amount to collect extensive traffic data from all over the city.

For Moceanlabs, car sharing is just one of the many mobility services it plans to test in Los Angeles. The entity is less a business sales unit but more a platform for experimenting with services, collecting data and developing business models from the findings. Its list of tests to come include micro-mobility services, like lending e-scooters or bikes, a shared bus that only makes designated stops and personal air vehicles.

Behind the investment is a sense of urgency about the changing car business. Market research firm Frost & Sullivan predicts that between 2015 and 2025, the number of car-sharing service users will increase by 36 million worldwide, while 5.3 million personal vehicles will disappear.

“The future of cars can be summarized into four words: mobility, electrification, connectivity and autonomous. But these factors won’t develop individually but in the end will merge with each other, like robot taxis,” said Jung.

“Experts say once autonomous driving is here, car purchases will be replaced by ride hailing. Our strategy at the moment is not stopping at simply releasing services but developing a platform that could collect data to develop vehicles and services.”

Moceanlab’s role in heading mobility experiments also explains why the unit is based in Los Angeles, which has one of the world’s most congested traffic. Aware of the traffic, car accidents and environmental damage, the local government has been pushing efforts to disincentivize car ownership. Last year, it established the Urban Movement Labs, a private-public partnership body. Hyundai Motor will join as the first carmaker member this year.

A possible gain from this partnership is lower public parking fees. Parking lot costs have been a big issue for U.S. car-sharing start-ups in the past.

“Ultimately, mobility services will have to develop in a way that suits local characteristics,” said Jung. “We don’t want to destroy the existing system but grow in a way by complementing it.”