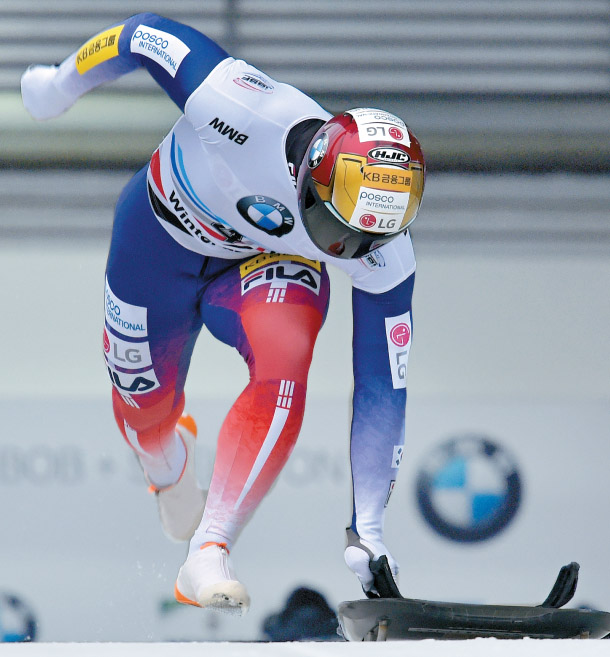 The Iron Man is back.

Although Yun’s second run time of 56.59 seconds was the fourth fastest time in the field, thanks to his lead in the first run, he was able to pick up a win. With a total time of 1 minute and 52.95 seconds, Yun picked up a win by a close 0.05 seconds ahead of Alexander Gassner of Germany.

Yun came to skeleton relatively late. In his final year of high school in 2012, Yun’s physical education teacher, now a director on the board of the Korean Skeleton Bobsleigh Federation (KSBF), suggested he try skeleton. The KSBF needed a skeleton racer, and Yun’s speed grabbed their attention.

Yun ultimately decided to stick with the sport, and with consistent training, he slowly made his way to the top.

Only a year and a half after starting skeleton, Yun competed at the Sochi Winter Olympics, finishing 16th. Then, at his second Olympics, where he competed less than six years after he began the sport, Yun won Korea’s first-ever gold medal in sliding events at the 2018 PyeongChang Olympics.

Despite his success, Yun was quickly forgotten by many Korean fans once the Olympics ended. But Yun didn’t stop. Throughout the eight IBSF World Cup races last season, he picked up two gold, three silver and three bronze. Although he failed to become the first Asian skeleton racer to win the IBSF World Championship, he still managed a podium finish by finishing third.

This season, he didn’t get off to the best start, finishing seventh at the first world cup race in Lake Placid, New York, on Dec. 8. Then, on Dec. 13, in the second world cup race of the season, he finished sixth. In his third world cup race on Sunday, he finally picked up a win. This also allowed him to move up two spots in the BMW IBSF World Cup standing for the 2019-20 season, at fourth.

In addition to Yun’s victory, Korea also achieved a historic achievement. For the first time ever, three Korean skeleton racers managed to finish in the top 10 at a BMW IBSF World Cup race.

Kim had an impressive first run, as he was ranked second by clocking 56.55 seconds. However, as he wasn’t able to continue the streak, he had to settle for a sixth place finish. His second run time of 56.94 seconds was the 11th fastest time in the field.

Jung was ranked 11th after his first run, at 57.11 seconds, but by placing seventh in his second run, clocking 56.69 second, he recorded his first top-10 finish at a World Cup event.

Although this is Jung’s first time finishing inside the top 10 at the BMW IBSF World Cup race, at the World Championship last year, he finished ninth.