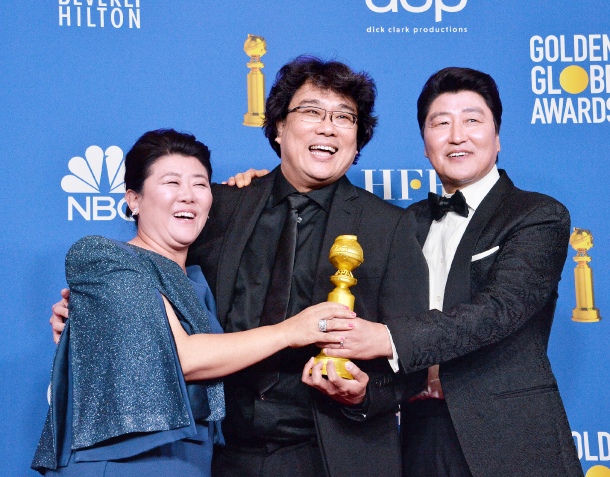 “Wow, amazing, unbelievable,” said the director as he climbed stairs to accept the award at the Beverly Hilton Hotel in Beverly Hills, California.

“Once you overcome the 1-inch-tall barrier of subtitles, you will be introduced to so many more amazing films,” Bong said through an interpreter. “Just being nominated along with fellow, amazing international filmmakers was a huge honor.”

He added, “I think we use only one language: the cinema.”

At the 77th edition of the awards by the Hollywood Foreign Press Association, Bong’s black comedy of class divisions bested other nominees such as “The Farewell” by Lulu Wang, “Pain and Glory” by Pedro Almodovar, “Les Miserables” by Ladj Ly and “Portrait of a Lady on Fire” by Celine Sciamma.

Although “Parasite” became the darling of American critics when it was released in North America in October, it did not qualify for the Golden Globes’ Best Motion Picture, Drama category. To qualify, a film must have “more than 50 percent English dialogue.”

But winning Best Foreign Language Film is a monumental feat for a Korean film on the international scene and could start a new chapter in the history of Korean cinema, according to Yoon In-ho, director of the CJ ENM’s film and communication department.

“Starting with the Palme d’Or at last year’s Cannes Film Festival, ‘Parasite’ has been invited to over 50 international film fests and decidedly became one of the most-talked-about films at these events,” said Yoon. “International reviews have been unanimously positive, and we are awestruck by the film’s acceptance at the Golden Globe Awards. ‘Parasite’ is sure to have rapidly uplifted the status of the Korean film industry.”

Attention is now shifting to the Academy of Motion Picture Arts and Sciences’ Best International Feature Film category. Nominees will be announced on the morning of Jan. 13. “Parasite” was shortlisted for the category last month, only the second time a local film made it to the Oscars shortlist since “Burning” by Lee Chang-dong at last year’s Academy Awards.

“The possibility of ‘Parasite’ being nominated is higher than ever,” said film critic Kim Young-jin. “The North American film distribution company for the film, Neon, may be small, but its marketing strategy is proving to be much more effective than for ‘Burning.’”