FDI now firmly in the era of $20 billion a year

FDI now firmly in the era of $20 billion a year 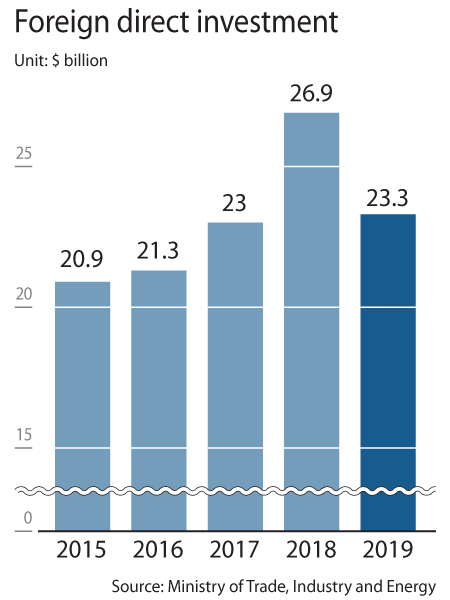 Foreign direct investment (FDI) fell in 2019, though the total was the second highest ever.

According to the Ministry of Trade, Industry and Energy Monday, FDI last year was $23.3 billion.

FDI dropped 13 percent from the all-time record of $26.9 billion set in 2018, but it has been running above $20 billion for five straight years.

FDI fell in 2019 due in part to external factors in the first half of the year, including shrinking global trade amid a trade war between U.S. and China.

The Korean government rollback of corporate tax cuts for foreign investment last year was also seen as a contributing factor.

In the first two quarters of 2019, FDI dropped more than 30 percent in each quarter.

It recovered 4.7 percent in the third quarter and jumped 27.9 percent year-on-year in the last three months of the year.

Aggressive promotions by leading companies and major mergers and acquisitions (M&A) transactions were the reason behind the increase in the fourth quarter.

FDI in the last quarter of the year was the highest ever recorded for a fourth quarter.

By country, the biggest increase was in terms of U.S. investment, which grew 16.4 percent year-on-year to $6.84 billion.

Its investment in services plummeted 76.2 percent to $190 million, while manufacturing FDI dropped 32.8 percent to $580 million.

The government said it will continue to employ policies that would contribute to attracting more foreign investments, providing incentives for investments that contribute to the advancement of Korean industries.

This includes investment into materials, parts and equipment makers and also into new industries, such as future vehicles, the hydrogen economy, biopharmaceuticals and IT.