Porsche’s first fully electric sports car, the Taycan, globally introduced in September 2019, is expected to be made available in the local market in the second half of this year. [PORSCHE KOREA]

Foreign automakers are preparing for a comeback in Korea after a disappointing 2019. Much like their domestic competitors, it will be all about new models, SUVs and future cars. 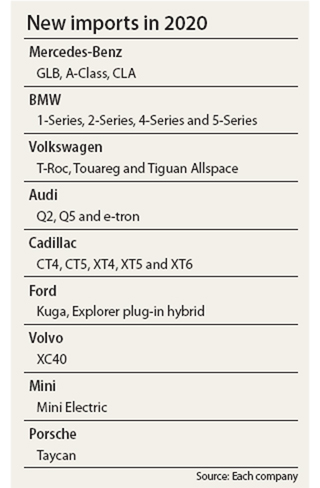 For the most part, the fall reflected larger trends. The slow economy - with GDP rising about 2 percent - and generally uninspired consumers kept a lid on sales. The imports were to a certain extent tracking the domestic market, where sales were down 3.7 percent in the first 11 months of 2019.

Some foreign automakers suffered more than others.

The Japanese carmakers were especially hard hit, as consumers shunned imports from the country because of an especially acrimonious diplomatic dispute. The brands decided to lay low and halt promotional events until late in the year - some products were introduced by press release.

In 2019, the sales of imported Japanese cars fell 19 percent.

The German automakers have also had their share of challenges. Following its 2016 emissions scandal, Volkswagen had to halt sales in Korea. It only returned to the market for about six months last year. After BMWs burst into flames in the summer of 2018, that brand had to struggle to regain the trust of consumers.

Total sales of German vehicles in 2019 was down 4.2 percent.

To turn things around, the foreign car companies are lining up a number of new offerings for 2020, and they seem anything but the standard fare.

One of the most highly anticipated models is BMW’s redesigned flagship 5 Series. The Korean unit of the German automaker will be introducing the latest versions of this lineup for the first time ever during the Busan International Motor Show in May.

On top of introducing the 5 Series, BMW is expected to roll out a fully redesigned compact sedans in its 1 Series and 2 Series in the first half of the year and bring in the upgraded 4 Series in the latter half.

Mercedes-Benz, the No. 1 import automaker in Korea, is focused on bolstering its offerings with the new CLA 4-door coupe and A-class small sedan. Its local unit is also betting on the GLB SUV to continue selling well from last year.

A spokesperson for the German luxury automaker said that the local unit is planning to roll out more new models throughout the year but has not decided which ones will be released and exactly when.

To put the diesel scandal behind it, Volkswagen is concentrated on bolstering its SVU lineup for Korean consumers throughout the year. Volkswagen Korea Executive Director Stefan Krapp announced in late August that the local unit will introduce the T-Roc compact, midsize Touareg and Tiguan Allspace SUVs in 2020.

Cadillac is believed to be planning to launch a new version of its CT4 and CT5 sedans and the XT4, XT5 and XT6 SUVs within the year.

Some automakers are targeting the future market with eco-friendly options.

On top of introducing the new Q2 and Q5, Audi Korea is expected to offer e-tron, its first purely electric SUV in the first half of this year. It will have a price tag around 100 million won ($85,000).

Ford is planning to bring in the plug-in hybrid version of the new Explorer large-size SUV, which was introduced in Korea late last year, after adding the new Kuga compact SUV to its lineup.

Mini Korea, the compact hatchback brand under BMW Korea, is preparing to introduce the Mini Electric, the first electric version of the iconic tiny car. Peugeot is bringing the e-2008, an electric small-size SUV, to Korea this year, while Volvo is introducing the electric SUV XC40, which was released in the United States last year.

Porsche is expected to introduce the Taycan, its first fully electric sports car, to the local market in the second half of the year. Maserati might be going electric, as it announced it will halt production of its GranTurismo last November.

It is unclear whether Japanese automakers will introduce new models in 2020, as Honda, Infiniti, Nissan and Toyota are still careful about making too much noise given continued negative sentiment.