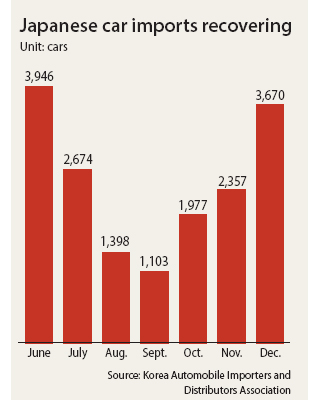 Demand for Japanese cars continues to strengthen, driven by aggressive promotions and discounts.

According to data Monday from the Korea Automobile Importers and Distributors Association, sales of Japanese cars in Korea in 2019 declined 19 percent to 36,661 units from 45,253 units posted a year earlier.

Sales for Toyota models dropped 36.7 percent on year to 16,774 units, while the number for Nissan nosedived 39.7 percent to 3,049 units. Sales for Toyota’s premium Lexus brand went down 8.2 percent to 12,241 units, while local demand for Nissan’s Infiniti luxury brand experienced a 6.1 percent decline to 2,000 units. Honda was the only automaker with a sales rise, with a 10.1 percent increase to 8,760 units.

With tensions between Korea and Japan high, local customers have been shunning Japanese products. Even though sales figures for Honda, Toyota, Nissan, Infiniti and Lexus were on the rise in the first half of the year, after the local boycott started, their sales began to falter, even fueling concerns that some of them might halt operations in Korea altogether.

In response, Korean units of the Japanese automakers introduced aggressive promotions toward the end of 2019.

Since November last year, Infiniti offered a rebate of up to 10 million won ($8,370) for the QX30 AWD, and Nissan started providing 17 million won of free gas for customers when they make a purchase using company financing. Honda offered discounts of 6 million won on the Accord 1.5 Turbo. Toyota and Lexus, which seldom hold promotional events, also joined the pack by offering free gas for buyers of the Prius and the Lexus LS500. They also held events highlighting their social and cultural contributions.

Local sales for Honda in December increased 130.7 percent from the same month a year earlier; followed by Toyota, at 69.6 percent; Lexus, at 61.8 percent; and Nissan, at 12.9 percent. Infiniti sales dropped 56.5 percent in December from a year earlier.