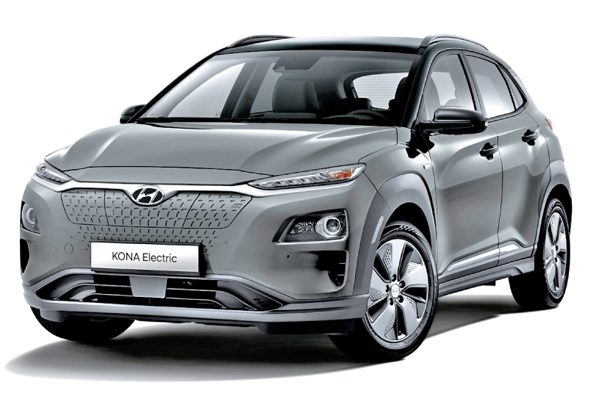 The largest automaker by sales in Korea announced Monday that the new vehicle comes with enhanced convenience features.

The Kona Electric has already been well received. According to the automaker, 13,587 units were sold in the domestic market last year, making it the best-selling electric vehicle in the country for two consecutive years. The model was awarded Best SUV Model in North America last year during the 2019 North American International Auto Show held in Detroit.

For the latest edition, the Kona Electric comes with a 10.25-inch display infotainment system. Navigation and map data are automatically updated wirelessly. The system also comes with features exclusively for electric cars, such as an application that helps the driver find the nearest charging station.

Hyundai Motor said the 2020 Kona Electric, which can travel up to 406 kilometers (252 miles) per charge, has heated second-row seats and an air filtration system that can clear fine dust from the vehicle. The electric small-size SUV is priced between 46.9 million won ($40,000) and 48.9 million won.

All other features remain the same as the predecessor. The Kona Electric is rated at 204 horsepower and 40.3 kilogram-meters (291 pound-feet) in torque based on a 64-kilowatt-hours battery.

The introduction of the new Kona Electric is in line with an ambitious plan to invest more than 100 trillion won by 2025 to become a force in the eco-friendly vehicle market and the future mobility sector.

Hyundai Motor Group, which includes Hyundai Motor and Kia Motors, plans to introduce a total of 44 electric vehicles, 11 of them being purely electric, by 2025.

This year, the two automakers will offer hybrid and plug-in hybrid versions of the Sorento, Tucson and Santa Fe SUV models.

By 2024, the group plans to introduce a new electric car architecture for its vehicles.